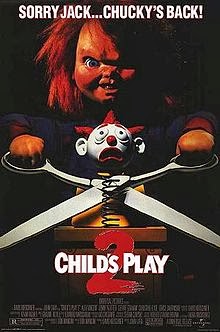 After the first “Child’s Play” found some success in theaters, it was only a matter of time for the slasher series to be franchised and two years later we find ourselves with “Child’s Play 2.” Directed by one of the writers of the original, this sequel finds itself essentially retracing the footsteps of the second half the first film with moderate success. The overall concept might be more or less “the same” and the execution might be hit or miss too, but that doesn’t stop “Child’s Play 2” from being a fun slasher despite its flaws.

Andy (Vincent) has been placed into temporary foster care after the events of the first film as his mother “gets better.” Whatever that means. Here he is placed into a nice home with another foster kid in Kyle (Elise) with two foster parents doing their best for him. Unfortunately, his nightmare isn’t over as the villainous Chucky’s body is re-animated from a company looking to outrun the controversy over their killer doll. Now Chucky needs to find Andy fast to make sure he isn’t stuck in the doll form forever.

While the whole concept of “Child’s Play 2” isn’t a far cry from the last half of the first film plot wise, director John Lafia and company seem intent on keeping the film fun and running with the elements that fans clung onto from the first: mainly watching a killer doll kill people and letting Brad Dourif swear and scream. Even our hero, played again with surprising effectiveness by Vincent, goes through the same arch as before with new foster parents don’t believe him and escaping the clutches of Chucky. “Child’s Play 2” is not built on originality, folks.

What the film is built on is being a fun and charismatic slasher. While most of the darker horror streaks are already missing by this time, they are replaced with cartoonish and over the top moments that do add a bit of fun to the entire experience. A sequence where Chucky follows Andy to school and kills his overbearing teacher is completely irrelevant to the plot, but comes off as one of the more memorable pieces in the film that lets Chucky do more ridiculous things like add a kill in a colorful setting and drop some darkly funny one liners in the process. The missing horror does make for a rather mundane slasher overall, but it’s hard not to be caught up in the ridiculousness of the concept.

“Child’s Play 2” has a pretty distinct cult following 20 years after it’s release and it’s easy to see why. The film is fun, focuses on the elements that made the first one a cult classic, and it has some silly, but memorable moments. It is a step down from the original in the lacking horror elements, missing atmosphere, and unoriginal plot progression that follows a bit too close to the original. Nonetheless, fans are sure to love (or continue to love) the first sequel in this slasher franchise despite some obvious flaws.