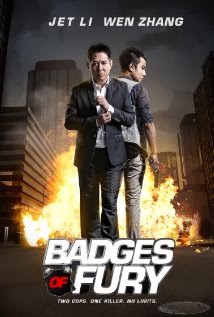 “Badges of Fury” is a rather interesting film. Particularly because much of the hype surrounding the film focused on Jet Li and the action choreography staged by the legendary Corey Yuen. The truth of the film remains that action is one-third of what this film contains. The other two portions are a mixed bag of mystery cop drama and comedy. I certainly wasn’t prepared for the slapstick “Looney Tunes” inspired humor and it took a couple viewings to adjust myself to what Tsz Ming Wong and company were intending for the film. Once I did, I enjoyed it much more than I did the first time around.

After three mysterious deaths occur to previous boyfriends to an upcoming film star (Shishi Liu), a team of detectives find themselves in a quirky situation. The sergeant (Michelle Chen) needs the case solved, the grizzled cop (Jet Li) needs the paycheck, and the young over eager detective (Zhang Wen) needs the respect. Together they will have to uncover a villainous plot that continues to twist and turn.

Going into the film initially, I thought it was more of a straight up action/crime flick and the style, which can be accurately described as a combination of “Shaolin Soccer” and “The Naked Gun,” left me a bit cold. The humor is significantly cartoon and slapstick inspired, complete with over the top sound effects and visual gags, and it was most certainly a shock to the system. By the second watch, I knew what was coming and acclimated myself to it. That’s why the second watch I had a riot.

“Badges of Fury” is not going to be for everyone. It’s a wacky ride to say the least. There is all kinds of visual gags and silly characters involved (although the final height gag for Jet Li had me rolling) and the humor ranges from subtle spoof with some “Infernal Affairs” and “Once Upon a Time in China” moments to full on Three Stooges inspired physical bits like the young detective’s involvement in the Jet Li/Wu Jing throw down which includes a face to window flattening moment. Luckily, most of the humor is rather effectively placed for maximum effect. Even smaller moments (the lab coat janitor moment is pure Zucker Brothers) seem to be well set up for the best results.

From there the movie even succeeds as an action flick. While Jet Li’s character rarely has anything to do for the actual plot, he shows up for all the best action sequences and throws down some great stunt work with high flying wire work and strong fun choreography that’s provided by Corey Yuen. The humor is interjected throughout the action set pieces to link them all together (even if some of the CGI is less than stellar) and it works for the most.

The problem then that hinders the overall quality of “Badges of Fury” is the rather jumpity (is that a word?) story narrative. Yes, we get the classic style detective story with a damsel in distress, a hidden villain, and lots of plot twists, but there is a lot of random side stories that really don’t need to be there. Romantic subplots are more or less forced into the second half, there is a whole sequence with a fortune teller (while actually quite funny) that is irrelevant, and most of the red herrings aren’t strong enough to fool the audience and are dropped once it’s shown that they are false. It can be a bit wishy-washy when it comes to thorough story telling.

Overall, especially once I knew what to expect, I quite enjoyed “Badges of Fury.” It’s often quirky enough, action packed enough, and consistent enough in its craziness to sell the overall outrageousness of its style and concept. I wish the foundational story for the film was a bit stronger, but alas you get what you get here and it’s fun either way.