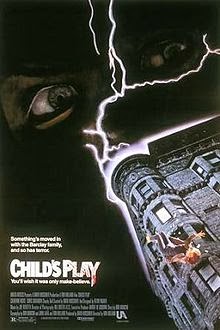 When it comes to iconic slashers, one does not have to look much further than the "Child's Play" franchise. While "Child's Play" might not have seemingly found its audience when it first came out in the late 80s, the rise of villain Chucky from the film is a rather famous one leading him to be one of the biggest faces in horror history. For this review I am going back in time to revisit the classic slasher that started it all - the darkly comic and rather suspenseful "Child's Play."

Karen Barclay (Hicks) has her hands full as a single mother to the young Andy (Vincent) just making ends meet and being there for him. So when she finds that coveted Good Guys Doll from a back street peddler for cheap, she doesn't bat an eye at picking up the children's toy. Too bad this isn't your normal toy. His name is Chucky (Dourif) and he has a bone to pick with a few people...

By the time that 1988 rolled around, slashers were already a dime a dozen and most of them were already getting generic. The supernatural twist had already been done with "Nightmare on Elm Street" and the serial killer thread was about as tired as it was going to get. In comes an odd combination of the two with a killer doll twist on top of it (which wasn't all that original either seeing as Stuart Gordon's "Dolls" was released just the year before) and it comes off a relatively smart and high energy flick.

Director Tom Hollad, who struck some pretty awesome success with "Fright Night," brings a strong sense of classic horror suspense to the film which sells some of the ridiculous elements of the script. Even when the film starts meandering into different genres with its voodoo subplot and a rather action packed car wreck sequence, Holland keeps the darker elements up front and takes it all with a very serious tone which eventually sells it overall. Having the first half of the film focus on the creepiness of the doll and having the audience even question whether or not it was all party of Andy's imagination kicks it to the next level. A dark streak of humor occasionally shows its colors throughout, mostly provided from the villain and the brilliant voice work of Brad Dourif, but truthfully the film is far more of a horror flick than its concept would indicate. Strong performances from all of the principle actors helps (including a few impressive moments from our heroic kid lead) and it makes "Child's Play" feel much more cohesive than the script might have indicated.

One doesn't necessarily go into a "Child's Play" film though for the strong atmosphere and the impressive enough acting, particularly when we start talking about the sequels, so how does it work as a horror film? As a slasher, it's effective enough. The kills are remarkable diverse here with some strong stunt work occasionally used (the first kill has a lady flying out of a multistory window to her death) and the special effects are really effective here. Occasionally the person-in-the-Chucky-suit can be unintentionally humorous, but the other animatronic work and the death scenes can work much better than expected (even if some can be a bit of a stretch - including a shock therapy death that's rather forced).

It's not a huge leap of the imagination to see why "Child's Play" was franchised. The villain is charismatic and very memorable and the story allows just enough loop holes for shitty horror sequels to exist with little in the way of continued continuity if need be. It's been ages since I've see "2" or "3" so it will be a rather fresh look at the first series of entries for this legendary franchise. As is though, "Child's Play" stands on its own with remarkably sturdy feet even after almost three decades. It's fun and well executed and remains as a slasher staple for any horror fan.