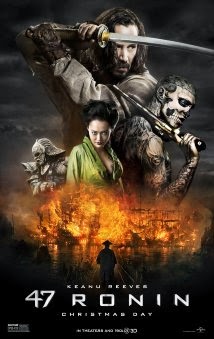 If one word could describe the experience of watching “47 Ronin,” it would be a simple one…awkward. This isn’t a huge surprise for an Americanized retelling of Japanese historical lore, especially one that stars Keanu ‘Shaolin Wooden Acting Man’ Reeves in the lead role, and it wasn’t a huge surprise that it bombed at the box office. The critics panned it, the audiences ignored it, but in the end…it wasn’t all that bad. It wasn’t good, but I’ve seen far worse.

Kai (Reeves) is a ‘half-breed’ in feudal Japan. Shunned by his clan for his looks and rumors that he was raised by forest demons (?!), he takes solace in knowing that his Master and Master’s daughter truly do love him for him. When a rival clan plans to overthrow his and frames his Master, he must partner up with the head samurai (Hiroyuki Sanada) and his faithful warriors to uncover a dastardly plan by a rival Master.

In a sense, there is certainly a classic samurai film at the heart of “47 Ronin.” A revenge plot, clan rivalry, an anti-hero lead shunned by society, and plenty of sword fighting all grace the general plot of the film and it creates a certainly solid old school foundation for the rest. Hell, there are even plenty of great moments in the film. A colorful bout between the two rival clans (featuring the ever awesome Cary-Hiroyuki Tagawa as the Shogun) in the opening deserves some credit as does most of the epic siege style finale of the film. I would even go as far to say that outside of the cringe worth performance of Keanu, the rest of the cast is impressively suited for the film. Sanada owns as the most engaging character in the film and Rinko Kikuchi (also seen last year in the epic as shit kaiju film “Pacific Rim”) simply eats up as the ridiculously weird witch. It’s as if there is a truly unique and solid film at the core of what “47 Ronin” has to offer.


This is, unfortunately, wrapped in modern shit blanket. Instead of focusing on the strong characters present, “47 Ronin” decides to try and engage the audience with way too much CGI “Avatar” and “Lord of the Rings” inspired monsters and a plot that needlessly focuses on a lead actor/character that is rarely engaging or interesting. Instead of a character driven action/drama that the foundation lays down, “47 Ronin” has a hard on for fantasy driven spectacle and the film crumbles because of it. Weird horse/lion monsters, bird monks, ogres, and even a dragon all show up for the action sequences and essentially destroy any great classic moments that could have been had. This is driven by a lead character, whom despite some solid intriguing ideas, comes off as totally un-relatable and wishy-washy as a hero played by the tree trunk emotions of Keanu Reeves.

On top of that, the film starts and ends with a very awkward explanation and recap of why this story is relevant. While I understand that the general American audience has no fucking clue about this tale or any of the cultural customs in the film, it still feels utterly tacked on for explanation's sake.

“47 Ronin” is not a bad film overall, it’s just a horribly executed one as it desperately tried to latch onto the wrong elements for an American audience. The structure and core of the film remain something interesting with its throwback moments to samurai film classics, but the rest is surface level drivel that leaves the film as forgettable nonsense. It all just ends up being so damn awkward.

Written By Matt Reifschneider
Posted by DarkReif at 1:00 PM