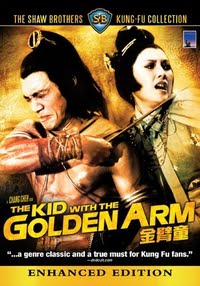 When a studio is pumping out a film every couple weeks like the Shaw Bros were accomplishing at the height of their career, you are going to have a pretty wide range of quality when it comes to their films. “The Kid With The Golden Arm” pretty much sits firmly in the middle of the pack. It’s got some great things going for it (hey, it’s a Venoms film), but its writing and story can be confusing and oddly structured.

A small village is in desperate need for assistance so a massive shipment of gold is to be sent to them for financial help. Unfortunately, a group known as the Deadly Valley lead by the illustrious Golden Arm Kid has made it very aware that they intend to steal the gold on its way there. Thusly a group of heroic individuals of various skill under the leadership of a legendary drunken kung fu master sheriff will have to fight off the villains to deliver the gold.

Some of the beauty behind these classic Shaw Bros kung fu films is how simple they are. A group of good guys must fight off a group of bad guys over some gold as they travel with it. Stock it with some great characters and really this is all that “The Kid With The Golden Arm” needs. This is what makes it so much fun too. Our drunken sheriff might be a caricature, but he’s witty and fun and our villains and heroes ably keep up the gimmicks that these films (particularly when directed by Chang Cheh) are known for. The fights are fantastically drawn out with highlights coming in the finale and a great ambush sequence with an armored fiend. Fans of Venom films will certainly find charm in this one.

Outside of the basics though, “The Kid With The Golden Arm” wants to throw in a few twists that don’t quite add up. It builds a few subplots (including a romantic one) that really fail to add a whole lot beyond necessary plot progression and the finale adds a twist that is only briefly hinted at a couple times earlier. These don’t necessarily pay off with the lacking focus of the film, but at least it tries.

“The Kid With The Golden Arm” is quite a gimmicky film with its over the top characters and very simplistic story. It’s hit or miss in execution and confuses with its awkward twists. Fans of kung fu films will enjoy it though and in the end that’s what counts.

Written By Matt Reifschneider
Posted by DarkReif at 10:05 AM