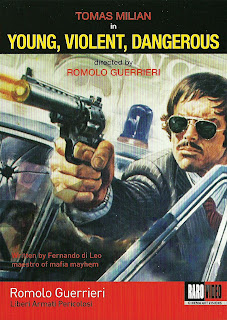 This was a surprise release for the Euro Crime fanatic in me. Just when I thought no more Poliziotteschi films would make it to state side in high quality DVD releases, Raro shocked the hell out of me with their announcement of "Young, Violent, Dangerous", a entry in the genre that I had not heard of prior despite the talented cast and crew involved with the film . My expectations were met as any film starring Tomas Milian and written by Euro Crime mastro Fernando Di Leo has to be good, though it definitely isn't as good as it could have been with the talent involved.

The plot is simple, yet unnerving as it follows three spoiled teenagers that go on a pointless and violent crime spree, robbing anything and killing anyone in their path. One of the teens girlfriends attempts to warn the police but their too late and it's up to the commissioner (Tomas Milian) to stop the teens before their trail of blood leads all the way to Switzerland.

The acting by our trio of killer teens is good, transcending past the lackluster English dubbing. It is unnerving how much these guys enjoy the carnage they are dishing and is especially uncomfortable in this age of school shootings around every corner. Our commissioner, despite a strong performance from Tomas Milian, sadly is a overshadowed by the rest of the film. His character is just brushed by as we follow the bloodbath of our teens. I understand the filmmakers wanted to make a film that wasn't a "Dirty Harry" clone with one cop saving the day but it would have been nice to flesh out his character a little more as Milian's talents are sadly underused.

Fernando Di Leo's script also only touches upon the perspective of why these teens from rich households decided to go off the deep end. There is a quick scene where Tomas Milian is chewing out their parents for poor parenting techniques and how money won't raise good kids. Other than this nothing is shown on how these kids could turn into cold-blooded murders.

Despite the scripts short comings, director Romolo Guerrieri gives the film a gritty atmosphere and he is even able to craft some suspense with explosive moments of sleaze and violence. Fans who love this genre know that violence is an essential ingredient and Guerrieri delivers the goods with plenty of bloodshed and suspenseful car chases. Not aiding in his direction is a poor score, which is a surprise as films in this genre tend to have tremendous scores that heighten the films likeability. Not with "Young, Violent, Dangerous" as the score is rather dull and the title sequence song is quite terrible.

With a tighter script from the late Fernando Di Leo that delved more into character development, a stronger cop character with more relevance to the story and more screen time and a better score, "Young, Violent, Dangerous" would have been one of the best the genre has to offer. Instead it is downgraded to a "good" entry that is definitely worth owning for fans of this gritty genre of Italian crime films.

Written By Eric Reifschneider
Posted by Cronosmantas at 12:01 PM