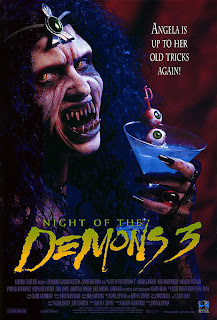 “Night Of The Demons” is a franchise that probably should have lasted longer than 3 initial entries and a recent remake. Then again after watching “Night Of The Demons 3”, maybe it shouldn’t have. This third entry certainly tries its best to make it with its low budget and poor writing (thanks to some charm visually from director Jim Kaufman), but it’s simply too much to overcome and this horror film falls prey to its clichés and some poor executions.

When some teens looking to score some beer at a local convenience store suddenly find themselves running from police thinking their off kilter friend killed a cop, they take shelter in the fabled Hull House on Halloween to evade capture. The least of their worries happens to be their own distrust when Angela (Kinkade) shows up to steal some souls from her next set of guests.

So the formula remains the same from entries 1 and 2 as this third entry follows it to a ‘t’. Group of overly sexual and assholish young folk trapped in Hull House fighting off demons and one by one becoming the monsters they face. La de freaking da. The one twist in this one happens to be the police officer hunting them down from the initial premise that gets them to the house. It rarely makes sense and rarely follows the same rules established (and broken) in the first two, so just go with the film and don’t worry too much otherwise it hurts your brain.

As per usual, the characters are mostly stock people cut from paper thin ideas that allow for various horrible deaths. This film lacks some of the clever kills or moments that the other two had. It goes out there with some of them (A snake hand? A cat lady?) and the film does get an ‘A’ for effort. Unfortunately, it lacks a lot sell the whole thing and despite some cool camera shots, just becomes under whelming as a supernatural horror and a slasher.

Yes, “Night Of The Demons 3” is your basic entry that carries the bane of shitty characters, cliché kills, and a formulaic plot. It occasionally charms itself away from its faults with some clever use of colored lighting (not unlike an Italian horror film) and camera shots, but it’s not enough to save it though from just being drivel.