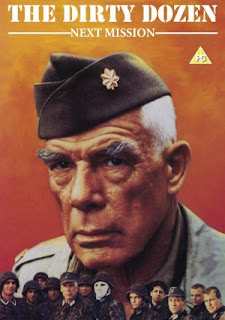 The testosterone fueled 1967 World War II classic "The Dirty Dozen" is one of my all time favorite movies, not only as a "men on a mission" war film but just as an overall film in general. It had all a man could want in a chest bulging film with dream cast lead by the ever reliable Lee Marvin. Though the film was a huge success it's still hard to imagine that filmmakers 20 years later decided to make a sequel. It just seems far too long to make a follow-up not to mention it's give the ultimate preconceived death of being 'made-for-TV". Not only did they wait twenty freaking years, they made it for freaking TV guaranteeing this long-awaited sequel is going to DOA. Due to its TV made nature I actually refused to watch it for years but finally decided to go into it free of expectations and you know what, for a TV movie, it actually wasn't all that bad.

Despite the extra wrinkles and weight around our returning characters faces and waists, the plot of this decades year later sequel takes place not lot long after the original with Lee Marvin in trouble again. Ernest Borgnine gives Marvin another deal... if he takes in another Dirty Dozen behind enemy lines to complete a nearly impossible mission, the prisoners along with him get their criminal records wiped free.

Lee Marvin, despite his age, is still as tough as ever but his appearance does bring some unintentional laughs when watched back-to-back with the first film. This war has seriously taken its toll on him as he looks like he's aged twenty years (considering the plot only takes place shortly after the first film)! Borgnine has packed on a few pounds and his character has mellowed a bit. Richard Jaekel also makes an appearance rounding out our three original actors to return.

The rest of the cast is made of some real likeable character actors. What's great about this sequel is playing 'spot the actor' as you recognize nearly all of the dirty dozen from other films, such as Sonny Landham ("Predator", "48 Hrs"), Ken Wahl ("Wiseguy", "The Soldier"), Gavan O'Herlihy ("Death Wish 3", "Never Say Never Again"), among others. The secondary cast is all well picked to ensure the film will be likeable from an actor standpoint.

Director Andrew V. McLaglen is a veteran of many theatrical mediocre action films and he does what he can with the limited resources of a TV-made-production but it still has a rather hallow look about it. He still manages to craft some good action sequences which was a surprise. What he can't save is the rather hum-drum script about assassinating an assassin to kill Hitler (don't ask).

The film lacks the character development and theatrical look of the original, but all that aside this actually isn't a horrible made-for-TV sequel. Just make sure you remember that it's 'made-for-TV' or else you will be tremendously disappointed but it kept my attention for its hour and a half running time, a definite feat for a TV made movie. I still wish there would have been enough interest to make this a theatrical feature as I would have loved to rejoin the Dirty Dozen for another big budget epic but alas that never happened. "Dirty Dozen 2" did draw enough viewers on TV that two more sequels would follow: "Dirty Dozen: The Deadly Mission" and "The Dirty Dozen: The Fatal Mission". This sequel can be found as a bonus feature on the 2 Disc Special Edition DVD release of the original film, stuck on the second disc, treated as if it's some dirty little secret. Dig it out, it's worth a watch at least one time.