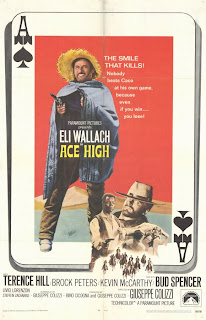 I put off watching "Ace High" for years for the simple fact that it's a sequel to "God Forgives... I Don't" (which hasn't been given an American DVD release) and the second film into what is referred to the Cat Stevens Trilogy ("Ace High" being followed by "Boot Hill"). While stuck at home recovering from jaw surgery I finally decided to throw it in. I've watched plenty of sequels in Italian cinema (like "Run Man Run" and "Violent Naples") without the luxury of watching the first films beforehand and they made sense so why not "Ace High". Sure enough "Ace High" was not only watchable enough on its own, but it is also one of the better Spaghetti Westerns I've seen in a while. And all this time I put it off just for the simple fact it was a 'sequel'. Damn you cult Euro film series and US distributors for not releasing all entries into a franchise!

We open with two morally ambiguous drifters (Terence Hill and Bud Spencer) arriving into a town and by sheer threat alone get their hands a large sum of money. In comes Elli Wallach, who escapes from jail, robs our two brutes of their cash, and then decides to ride across the countryside spreading the wealth amongst the general public. Hill and Spencer of course don't take to kindly to their assets being given away and they capture, and recapture Wallach numerous times in order to get their cash back while Wallach at the same time tries to get revenge on the 'friends' that left him to rot in prison.

Die hard spaghetti western fans will notice right away the team-up of Hill and Spencer but don't be fooled into thinking this is going to be a slap stick comedy in the vein of their "Trinity" films to come. "Ace High", though not without its moment's of humor, is a rather serious spaghetti western and to be honest I much prefer this approach as opposed to the slap-stick overload in the "Trinity" films. The humor here is well-place and funny without overshadowing the serious nature of the film (which I have heard, but cannot attest too, is a little more light-hearted than the first film "God Forgives... I Don't").

The wonderful third addition to the cast is American actor Eli Wallach, hot of the heels of his wonderful portrayal of the half-breed Tuco in Sergio Leone's "The Good, the Bad and the Ugly." His charcter here, a half-breed Greek named Cacopoulos, is much in the same mold as Tuco. He's cunning, over-zealous, has a sense of humor not without a streak of deadliness. Not as strong of a character as Tuco but for fans of Wallach, this character will not disappoint.

The look of the film is also great, taking great inspiration from teh Leone films to come before it. Lots of great sun blasted, windy desert landscapes and plenty of cool camera angles supplied by genre veteran Giuseppe Colizzi. He gives the film a look of a top tier Spaghetti Western and fans of Leone will definitely like the look here. If I would have to make a few complaints is that the film is tad to long, running over two hours, so it can drag at some moments and the score surprisingly is unmemorable, very uncommon in the Spaghetti Western genre.

Paramount pictures picked up "Ace High" for U.S. distribution no doubt due to the fact it stars Eli Wallach. Hell they even plastered his name above everyone elses on the U.S. prints and poster artwork and all theater goers were blind to the fact that this was a actually a sequel. This is also why I haven't seen the first film as Paramount released "Ace High" on DVD in American but the first film is impossible to find. Considering how much I liked "Ace High" with its great cast, grand look and serious story with perfectly sprinkled moments of humor, I need to locate a copy of "God Forgives... I Don't" asap! Now only if we can also convince Wild East to re-release the third entry into the series "Boot Hill" on DVD as well...

Written By Eric Reifschneider
Posted by Cronosmantas at 12:45 PM