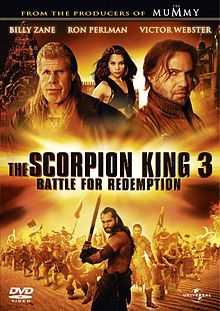 After an abysmal experience watching “Scorpion King 2”, it’s very very very hard to believe that this franchise would survive. At all. Yet here we are once again with another installment of “What The Fuck Is Going On With This Franchise?!” Let’s break down how “Scorpion King 3” fits into the picture.

Mathayus (now played by Webster) has been wandering the land squandering his talents as a mercenary after his kingdom fell and his queen perished after the events of the first “Scorpion King” film. When combating brothers have him hired to end their conflict, he travels to a foreign jungle (which looks an awful lot like ) to aid a king in protecting his homeland from war.

As if throwing a prequel in for good measure didn’t make things more complicated, this film happens to take place after the original one and rarely mentions what took place to get them there. Even though a major character point for our Scorpion King is his redemption (it’s the damn subtitle) they decide to just skip ahead. At this point, if continuity is a big thing for you then you better skip this one because it rarely makes sense in the grander scheme.

Beyond initial confusions and its insanely low budget, believe it or not this third entry is better than the second. It helps that it focuses down on some better action sequences (of which there is plenty with elephants, swords, magic, fire hammers, etc.) and has a much better cast (including a lead that doesn’t make me want to puke and adds his own charm to the film) for it to build on. The script is poor, the writing idiotic particularly when it comes to the villains, and it has moments of sheer relentless stupidity. Yet in the end, it wasn’t as bad as it could have been and it and it still has moments of pure silly fun that make it worth watching if you are looking for a B-movie. It’s got a silly side kick, strong women that succumb to the Scorpion King’s mighty braids, and Ron Perlman in a bad wig. Who could want more?

This is far from a great film and often enough it will have you desperately racking your brain to make it work logically. Put that aside though and it’s half enjoyable with its sword fighting and general action packed fun. It actually gives me hope for this franchise…which is sort of sad in a way…