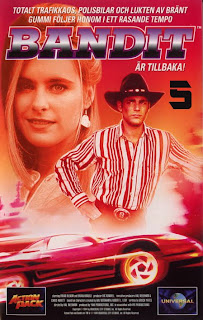 Look at that title... could they have possibly squeezed one more fucking word of "Bandit" in there? Fucking hell! Well this fifth entry into the "Smokey and the Bandit" franchise (the second in a string of made-for-TV sequels) is a little more entertaining than it's utterly generic title, which is especially good considering how overly underwhelmed I was by the first made-for-TV sequel "Bandit 4: Bandit Goes Country".

Well this time Bandit is in trouble with the law. So you're saying "what else is new", right? Well this time it isn't his fault. Someone is pretending to be the Bandit by stealing his rig and driving the same model car in order to steal a top secret prototype car that Bandit was hired to transport. Can Bandit catch the culprits and deliver the car to clear his name before the town's sheriff locks him up for good? Considering there were two more of these made-for-TV sequels I think we can safely assume that would be a "yes".

The simple plot is easy television filler and this hour and a half long movie really acts like an episode of a television series, complete with a title sequence showing clips of all four television movies playing in the background of a barf inducing country theme song. There really wasn't enough plot to keep this film cruising for its hour and a half running time and by the end I did get somewhat bored even with all the lame stunts that director Hal Needham threw at the camera.

What helps this sequel out is the addition of a "Smokey" character in the form of John Schneider, a poor Michael Biehn look-a-like. He ain't close to the classic Bufford T. Justice of the original theatrical trilogy but at least he offers an antagonistic figure to challenge the Bandit, an aspect "Bandit 4: Bandit Goes Country" sorely lacked. On the other hand love interest is dull and definitely the least interesting of all the leading ladies in these rather uninteresting made-for-TV follow-ups.

I will admit I did enjoy "Bandit 5: Bandit, Bandit" more than I thought I would and it's definitely a step up from "Bandit 4: Bandit Goes Country" but this is still basic TV filler with a plot that acts like a TV series episode stretched to film length as opposed to a proper sequel to a popular comedy franchise.

Written By Eric Reifschneider
Posted by Cronosmantas at 2:38 PM