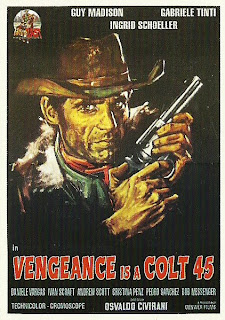 As if 30 unofficial sequels to Sergio Corbucci's 1966 Spaghetti Western hit "Django" wasn't enough, distributors and filmmakers took it upon themselves to make unofficial follow-ups to the cult classic surrounding Django's offspring, much in the mold of Universal Horror films of the black-and-white days. Hence we get "Son of Django", also widely known as "Vengeance is a Colt 45". The son of Django taking revenge on his pa's death... it's a concept that sounds intriguing to any Spaghetti Western fan. Sadly it ain't and ends up being just another forgettable obscure Euro western.

We open with the violent murder of Django, witnessed by his son, and then their home set ablaze. Years later the 'son of Django has his mind set on vengeance, with a colt 45, as he heads into a small town where to warring land barons are bringing the town to its knees, with one of the barons predictably being the guy who shot his pappy in the back

The films plot reminds me a lot of "Death Rides a Horse", just minus the atmospheric filmmaking, great cast and more predicable plot 'twists'. The only actor worth mentioning is Guy Madison, one of the many fading American stars that jumped ship to star in low budget films in Italy for hefty paychecks. Sadly even the charming Guy Madison is mostly forgettable as the old gunman converted to a man of the cloth (he would later play a similar and more memorable role in "Reverend Colt").

Nothing much to recommend about "Vengeance is a Colt 45", or "Son of Django" or whatever other titles this bland Spaghetti Western hides under. The score is likeable but everything else, mostly the characters, are completely faceless resulting in a film that can even be a little trying for die-hard fans of the genre. Released by Wild East in a double feature with "Reverend Colt".

Written By Eric Reifschneider
Posted by Cronosmantas at 11:44 PM