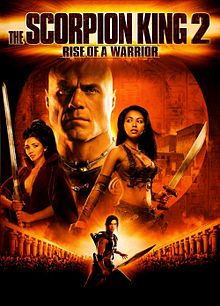 Although “The Scorpion King” met with critical hardships, its financial earnings made it a winner. The first one was a fun film bringing the “Conan The Barbarian” kind of film into a modern age and it worked its charm to the brim. That much cannot be said for “The Scorpion King 2: Rise Of A Warrior”. It’s not like “Conan” at all. In fact, it’s more comparable to “Hercules: The Legendary Journeys” in how bad it is.

A young Mathayus (now played by Copon because it’s a prequel!) watches his legendary father die at the hands of the warrior Sargon (Couture). He trains to become an assassin to give himself the skill set to bring vengeance down on this evil king. With the help of a few new friends, he must travel to the underworld to retrieve a mysterious sword to defeat the black arts of his target.

Whereas the first film played up the swords and downplayed the sorcery, this film does the exact opposite. Our assassin must fight monsters, gods, and battle black magic in the most utterly silly ways. Most of it lacks logic and the film seems to have to travel at lightning speed the entire time to force feed all the things to make it feel like a completed movie. I won’t go into too many details about the ridiculousness of its plot and how little it makes sense (if the villain can shoot a victim seeking arrow that can navigate streets why wouldn’t he use that all the time?), but know that if you think about it while watching you just might have an aneurysm.

Beyond watching a sword and sorcery flick that features poorly crafted CGI and a poorly edited Minotaur sequence, “Scorpion King 2” rarely has anything else going for it. The action is based on special effects (which are poor), the plot heavily favors characters (which are poorly acted and given worse dialog), and its story desperately focuses on the epic (which is told with one of the worst narrations of all time and forces an almost “Pirates Of The Caribbean” like fantasy quality into it). Honestly, I had trouble just getting through the damn thing instead of enjoying it for what it is.

If you do enjoy the late night crappiness (which does have its time and place) of “Hercules”, then there is a chance that “Scorpion King 2” might play its song for you. If you, like me, feel compelled to want a bit more quality from a franchise with the potential it carried then skip this one and move on disregarding that it might even exist.

Written By Matt Reifschneider
Posted by DarkReif at 9:43 AM