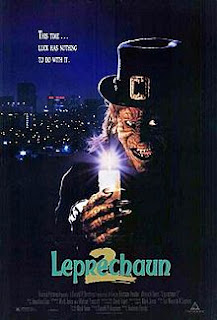 The surprising quality of “Leprechaun” takes one by surprise. Unfortunately after watching “Leprechaun 2”, it’s fairly safe to say that it really was a one trick pony. This sequel tries to recapture the charm and hilarity of the original while adding in a few new elements, but fails to blend the horror and humor and it comes off as a film desperate for laughs and less than memorable on the horror end.

A thousand years ago, our vicious Leprechaun put a curse on his slave’s blood line. He would, in that thousand years, take the woman of descent as his bride on the night of St. Patrick’s Day. Enter recent day and Bridgette, the descendant of the bloodline, is going to have a very bad day. Luckily, her boyfriend Cody and his conniving friend/boss are not going to give her up without a fight.

Shockingly, “Leprechaun 2” is practically void of any connection to the original one. Sans a similar looking leprechaun, this baby might as well be its own film. Details don’t match up, it doesn’t explain how our villain came to be in (since he “died” in in the first one), and his powers and weaknesses are different. Half the time was spent trying to figure out just what powers he has rather than getting sucked into the tension of its plot. Not a great way to start this film.

Beyond its annoying disconnections, this film rarely succeeds. It gets a couple of great hilarious one liners in there and a few sequences inspire some charm (including a rather Mad TV inspired skit with the leprechaun in an Espresso shop nursing a hangover), but in the end it’s not enough. Some of the humor is completely amiss and awkward. The plot is actually rather fun, but the execution of it is littered with holes and oddities that undermine the charm and experience.

The biggest disappointment with the film is the lacking horror elements. Despite a couple of rather clever kills including a lawnmower blade scene that doesn’t make a lot of sense (but who cares at this point?), there is no tension and some very disappointing deaths. At times, I debated at whether or not it was rated PG-13 in its lacking slasher elements. That isn’t good for this film either.

“Leprechaun 2” simply lacks the charm to pull of its clichés and blend of horror humor. It’s more awkward than not with its hit or miss actors and jokes. Not what I wanted from an original film that was impressively blended. Not sure if I’m looking forward to “3” at this point or not as it takes place in Vegas. We know that doesn’t always turn out good for franchises.