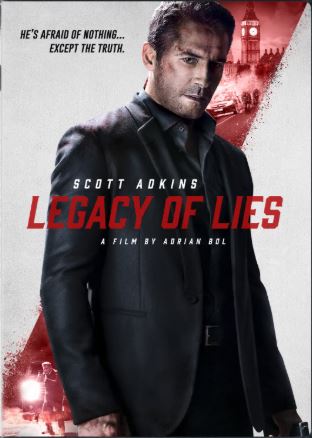 Well, say what you will about 2020, but it has not stopped the massive run of films that Scott Adkins is having in the last handful of years. With only a handful of misses in the run, Adkins continues to impress and his latest, Legacy of Lies. A multi-national film, although the Ukrainian and Easter European influence can most certainly be felt in the tone and use of its setting, there is a sense of seriousness and darker atmosphere that makes it a perfect counterbalance to Adkins’ other action highlight of the year, Debt Collectors. Legacy of Lies pulls heavily from the modern meets old school tonality that has become its own style in the 00s, but the combination of some sharp direction, great characters, and Adkins’ impactful screen presence makes it one of the highlights of a rather dismal year in action cinema.

An ex-MI6 agent, Martin (Adkisn) finds himself caught between American and Russian agents when an old case, one that left him and his daughter widowed comes back to life. With his daughter (Kneafsey) is kidnapped, he will have to team up with a shadow of his past (Sobol) to unravel the missing threads.

Legacy of Lies is a film that, judging from the generic feeling of my above synopsis, may not inspire a lot of people to take a chance on it based on its straight to home video release and relatively quiet marketing campaign. Yet, like so many of Adkins other action films, it’s a genuine gem of a film. The script is far more layered and thoughtful than so many other trashy action films released in the last handful of years. It spends quite a bit of time with Martin and his daughter, building their chemistry and connection so that their eventual separation provides the proper motivation for all of the characters involved. Even some of the villains, normal throwaway roles for a film like this, are giving a bit of depth to the character. The film toys with a lot of larger tones and concepts, particularly Ukraine, Russian, American, and British tensions of current affairs, and it occasionally falls prey to its own ambitiousness with threads left dangling. Still, there is a depth to the basic ex-military guy caught in a conspiracy plot that works for everyone involved.

Playing on some of the tensions of its Kiev setting, the film adopts an Eastern European thriller tone that sits well with the script and characters. It helps that writer/director Adrian Bol seems to focus on building up to the key moments versus slamming them into the narrative with brute force. The action is crisp and well shot, particularly when it allows Adkins to do his thing without over editing the moment and the film gives just enough of that thriller vibe to hook its audience into the consequences and character investments without taking too long to move onto the next piece of the plot. Performance-wise, the film has some great ones too. Adkins does his tough guy thing with a nice sorrowful underlining and Honor Kneafsey honestly owns every scene she’s in. As mentioned above, the general ambitiousness of the plot can sometimes pull from the brisk movement, but if an audience keeps in mind that the film has a substantial European thriller vibe with its usual Adkins ass kicking then expectations will properly be set.

Legacy of Lies is definitely a highlight of the year. It’s littered with charismatic and layered characters, a fantastic setting, and Adrian Bol knows how to shoot action, drama, and tension with a steady and intentional hand. The action is bombastic and well-executed while the espionage narrative gives plenty of mystery and atmosphere to it to make it memorable. In a year where so much of action has either been postponed to shoveled off into oblivion, make it a point to check out Legacy of Lies. For a low budget actioner, you can’t get much better this year than this.