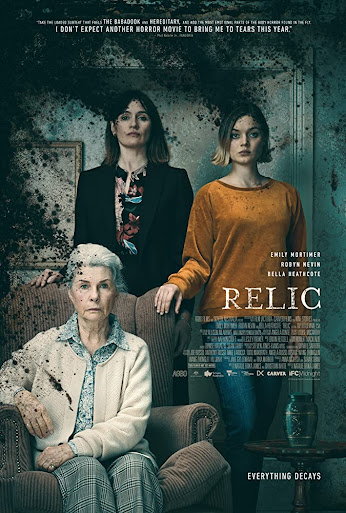 I've said before, both briefly in writing and many times broadly in my life, that the reason I love horror as a genre more than any other is that it's the only genre that can tell any kind of story. This is for a few reasons, it and comedy share pacing concepts, and it shares drama's allegorical abilities. It shares action's spectacle and still brings a flavor uniquely its own. It's why the genre ranges from titles like Gingerdead Man to The Silence Of The Lambs. I have always felt, however, that it's greatest strength narratively (there are psychological benefits to enjoying horror as well, as it's a safe space to explore the darker emotions of life) is that of metaphor. By exploring the horror that's generally popular at any given time you can see what society at large was afraid of. Relic uses horror as a lens to explore some of the most fundamental fears that exist, and I think that feat alone makes it worth viewing.

Edna (Robyn Nevin, best known to genre fans from her role in the Matrix sequels), an elderly woman, has vanished. Her daughter and granddaughter (Emily Mortimer and Neon Demon's Bella Heathcote appropriately) come to Edna's home to help search for her. As concerns of potential Alzheimer's begin to rear their ugly head the grandmother returns, much to Sam's relief. As time goes on it becomes increasingly clear however that whatever returned, it wasn't the Edna who left. Things moving about the house during all hours of the night and increasingly dangerous aggression makes the women wonder if something supernatural is instead afoot.

Regardless of the plot at large, this film does use the metaphor of demon possession, a reasonably popular scenario that has been used to great effect for all manner of metaphors from adolescence to pregnancy, mental health, and beyond, is used as a stand-in for dementia. It's not the first time this comparison has been made, but previous examples have leaned into it from a general "old people are scary" angle. It's valid, as fear of aging is one of the great unchanging fears, but Relic uses it with solemn aplomb, a sympathy that makes this movie truly begin to feel like a borderline drama. It's a slow burn, as they say, and that's not to imply that there aren't real scares to this movie, but they're more conceptual. The loss of self, of identity, and the existential terror of it.

This movie is also about grief and it uses the characters of Edna's progeny to express two very different, and valid, responses to said, existential terror. One is fighting against it, hoping to reclaim the mother she remembers and the other is clinging to her grandmother, trying to have their time together even if the personality has changed. Not to get overly personal or editorial about it, but having been a nursing assistant earlier in life I've had a lot of exposure to the ravages of dementia, but have largely been able to view it clinically. And that's the way this film affected me, clinically. A friend of mine, the one who suggested I see and review this film in the first place, had a more emotional reaction to it, having had a more personal experience with dementia. I think that's reasonably telling, and two incredibly valid takes on this movie.

Like poetry, Relic is a "tone poem" (much as I tend to loathe the term) and this movie is beautiful. Well shot, well-composed, narratively well-paced, if a bit slow on the tension, and supremely well-acted. It's valid to just take this as an art film, a dark tragic drama, and it holds together well in that way. I think that if you're inclined to be swept in the emotional or philosophical weight of the theme, this movie provides a torrent of that, viscous as oil and nearly impossible escape.

I think this is a very good, bordering on great, feature debut for Natalie Erica James. Although it may not please all elements of the genre I love so much, with this film being very light on splatter, gore, counterculture controversy and some other things horror fans argue is the lifeblood of the genre, I believe it does use a more classical horror's trappings to send its tragic, but very human message well. Whether you want to fight or embrace it, you can't stop the processes of aging, and Relic presents that reality with an artistic but unblinking eye.