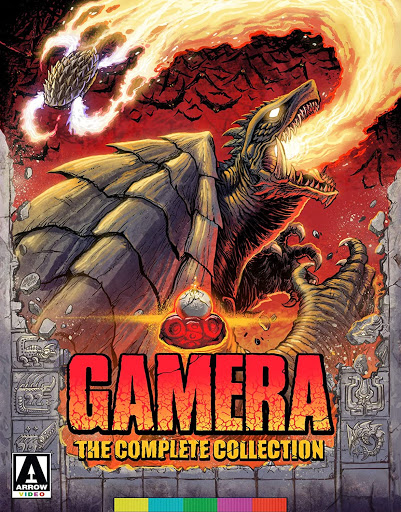 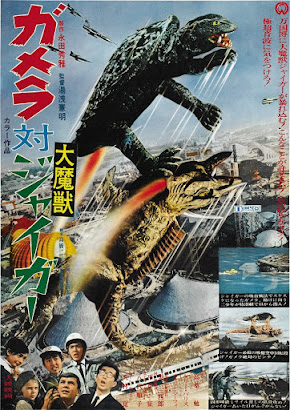 There has to be a Rolling Stones joke somewhere that I can use with the name Jiger, but it’s just sitting on the tip of my tongue. Fine, fine. That was a terrible way to start this latest article going over the next three films of this glorious Gamera Complete Collection, but I certainly couldn’t help myself. Maybe it’s because I was having so much for with Gamera Vs Jiger that it just carried right over. Nonetheless, here we are and either you’ve stopped reading altogether or you’re just along for the rocket turtle ride.

By this time in the Gamera franchise, the formula is now firmly set in stone. The relative ease of how the previous film filtered its main concepts into a fully science fiction fueled narrative spills over into this one. Instead of science fiction though, Gamera and our human protagonists firmly plant themselves on Earth and within the realm of the fantastical. Jiger is an ancient monster buried under an unearthed statue and when the people try to move the statue, Jiger comes out to kick two hundred metric tons of ass. There’s a lot about the statue, how a piece of it is key in defeating the new horned foe, but most of it is just plot to feature the 1970 Expo center, kids who have to take a submarine instead of Gamera to fight off a parasitic baby Jiger, and more kaiju battles than any previous film.

As always, the plot is relatively thin and the narrative is simplified to appeal to families with children, but it gets through it with relative ease that doesn’t feel too forced. The highlight of Gamera Vs Jiger is the immense amount of battles and how this new villain seems to feature a thousand tricks to defeat our heroic titan turtle. Some of it is silly, all of it is gimmicky, and it doesn’t quite have the edge of the previous film (pun intended), but Gamera Vs Jiger is a welcome addition and an easily entertaining watch. 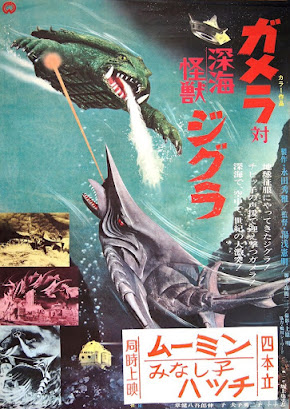 With each film in this Gamera Collection, I start off by watching the introduction by August Romone. Having seen Gamera Vs Zigra before, it was a film that I never loved, but knowing some of the history behind it through his introduction has made me a little more forgiving. It’s this kind of context, information, and analysis that makes this set worth watching. The problem that Gamera Vs Zigra suffers from is directly related to its history and how it’s studio was on the ropes and budgets were being cut during production of this film. It suffers from it. Quite obviously at times.

As with the last few entries, this one follows the same formula. At this point, you should know it if you’ve been following this series of reviews. I’ll skip the basics. Instead of the more fantasy inspired plot and villainous kaiju elements of the last film, Gamera Vs Zigra returns to the science fiction where a space ship (which doubles as a submarine – reminding me how much this series weirdly focuses on underwater elements) filled with a giant end up at odds with some kids and our reptilian hero. There is another environmental focus for the film, a theme this series tends to flirt with at times, and a Sea World park is the basis for the human element. A human element that tends to be completely unmemorable, for the record. The problem with the film is that, for as odd as it can be, it’s a rehash of various other films mashed into one. Gamera has had to battle a shark before. He’s battled a villain with a slicing laser. Kids running from aliens is redundant and the film never quite finds that new angle to really add to it – outside that our evil kaiju, Zigra, can talk to people. Cool?

Director Noriaki Yuasa does get to toy with some new ideas with the visuals. The film, since its villain is a giant ass laser shooting shark, sets most of its battles at the bottom of the ocean and with that comes some fun new visuals. Truthfully, it’s when Gamera gets Zigra onto land and starts throwing it around that I certainly had the most fun with the film, but the battles are decent for the ones in the film. This time around there seems to be less of a focus on maximizing the carnage on screen, no doubt due to the previously mentioned budget cuts, and Zigra doesn’t quite have the tricks in his (fin) sleeves that fans would be used to by this time, but it’s enjoyable enough. All in all, this film just lacks in silliness and creativity that makes the formula feel fresh seven entries in. In fact, this would be the last film in the series for almost a decade before the next one. 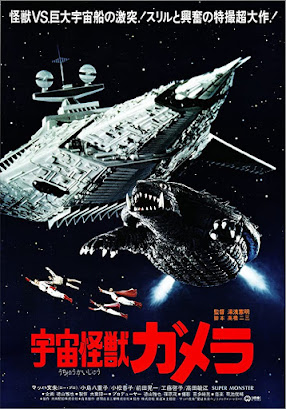 What in the Godzilla’s Revenge kind of hell is this film? Coming out almost a full decade after the previous release, the collapsing of its studio, and a bunch of other questionable business shenanigans, Gamera: Super Monster feels like the cheap, ill-advised, and final gasp of a studio desperate the completely drain every dollar from one of its more lucrative franchises. It’s such terrible concept, where 95% of the Gamera footage is stock footage “greatest hits” from previous films, that it feels baffling and, dare I say it as a fan of this series even with its ups and downs, offensive. The new footage surrounds three interstellar heroines attempting to protect the Earth from invaders, with the help of a musically inclined child, and it essentially just as them fuckin’ around and watching clips with the audience and yelling things like, ‘Go Gamera! Kick the shell out of the bad kaiju!’ The storyline is utter nonsense and the new footage looks cheap, rushed, and poorly executed.

Returning to the director’s chair is long time Gamera head-hauncho Yuasa, but man does this feel like he was asked to try and revive a dead and highly flogged horse with this one. Sure, he gets to use all of the cool kaiju battles from previous films (and oddly enough, a couple of sequences of anime differentiate the kid’s dreams from reality – cause, sure, why the hell not?) but it hardly feels cohesive and just smacks of bad creative choices made my bad business decisions. To spend more time expressing my perplexed dismay and outright anger at just how awful Super Monster is as an ending to the original run – would just be as redundant as the film. Think of it as a bonus feature for the set and only watch if you’re a glutton for pain.