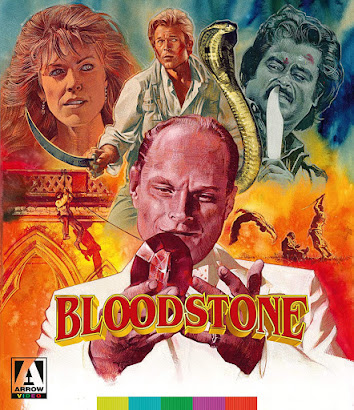 For those of you that grew up in the home video boom of the 1980s and early 1990s, there are going to be a handful of films that have a nostalgic power that trumps the actual quality of the film. For many, it’s films of their childhood or ones with strong memories attached to them. Sometimes it’s one moment, perhaps a man with a silly voice saying “The Bloodstone, please.” Perhaps that last example is more personal for me than a general one for the masses, but it’s the reason that Bloodstone always stuck with me. When the opportunity to revisit this childhood memory came about, thanks to a new Blu Ray release from Arrow Video, I was happy to leap into Bloodstone and see if it could live up to the fun feelings and brilliant cover artwork of my memories.

Memories can be tricky, huh?

Coming around after the massive success of Indiana Jones, the boom of ‘adventure’ films in the 80s provided some classics like Romancing the Stone, B-classics like King Solomon’s Mines, and lower tier films like Bloodstone. If someone happens to be a fan of the second or third tier adventure flicks of this period, you probably have seen Bloodstone at least once. One’s enjoyment of the film requires a bit of tongue-firmly planted in cheek, but even then, it may not be everyone’s cup of tea.

In its narrative spill on how a newly married couple from the US happen to stumble into the discovery and attempted theft of a legendary giant ruby called the Bloodstone, this film from writer/producer Nico Mastorakis and director Dwight H. Little attempts to find the charm and excitement of the previously mentioned mainstream and cult classic adventure films. The problem that undercuts this approach, as it does for so many of Mastorakis produced films is that it tries very hard and it stumbles to inject life into its formulaic approach in replicating what worked in other films. The amount of predictable plot spins, simplistic character beats, and paint-by-numbers action set-pieces rarely inspire the kind of thrills one would want from an adventure film and while, technically, it delivers on all of the expected moments, Bloodstone rarely exceeds with any of it.

Outside of an incredibly generic plot with kidnapping, inept police, honorable thieves, and just a hint of a larger money-making conspiracy by a rich villainous asshole, Bloodstone suffers from one major issue that becomes apparent almost immediately. The main couple, an ex-cop and his new wife (who is promptly kidnapped and exists mostly as an irritating damsel in distress for a majority of the film,) are just annoying. The film tries so hard to find that hero and damsel dynamic, complete with a slew of eye-rolling one-liners, that it actually drags down many of the better sequences. Oddly enough, it’s the Indian secondary characters – a smart ass and well-connected thief played by Rajinikanth and the inept detective who serves as comedic relief, that brings a strangely effective energy which can be charming as hell. Rajinikanth’s character, Shyam, is blissfully entertaining to watch and his anti-hero stance is easily the reason to watch Bloodstone.

Considering how the action-adventure flick is one that only comes and goes in spurts throughout cinematic history, usually spurred on by one film that has a clever angle on the genre, it’s easy to see why Bloodstone has a cult following. It’s just silly enough to warrant a dedicated fan base to clamor over it as an overlooked genre classic. The truth remains though, even in a genre that produces more knock offs than unique and inspiring content, Bloodstone is a third-tier kind of film. It falters at finding its balance between humor, action, and thrills while running through the motions of a generic script. If given the choice, I recommend some of the other action films from director Dwight H. Little, like Rapid Fire or Marked for Death, for a more enjoyable afternoon.

If one is interested in partaking in the quest for the Bloodstone, it is highly suggested to leap for this latest Arrow Video release. While I am not the biggest fan of Mastorakis, his interviews on these Blu Ray releases are incredibly entertaining and a highlight of the release. There is plenty of other aspects to enjoy, as they are listed below, but the way that Arrow always treats their releases make it a worthy investment if the film intrigues one at all. 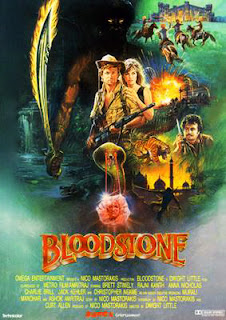