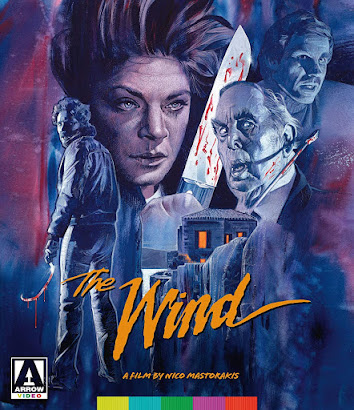 Now, it may come as a surprise to no one – particularly those who have followed Blood Brothers for a while, but I am not one of Nico Masterokis’ biggest fans. The cult Greek director has his merits as an entertaining one, grasping onto whatever trend is currently popular and delivering his own brand of knock off, but for this reviewer that’s mostly what he delivers – knock offs. This isn’t necessarily such a bad trait, although I will never sing the praises of Island of Death as long as I live, and it can produce some interesting films. The Wind, for example, is one of those movies. A strange mixture of European thriller and American stalk and slash, this little horror flick delivers on a variety of moments. While the ultimate result is perhaps a bit too tame for either parts of its concoction, the mixture is intriguing enough that cult fans should certainly dig up this one. The Wind doesn’t blow nearly as hard as it might have.

When an American novel writer, Meg Foster with her piercing blue eyes, decides to rent a secluded house on a Greek island to dive into her next book, she quickly finds that the offseason might not be as quiet as it would seem. That’s because the local handyman played with scene devouring Wings Hauser, has gone off the rails. With a sickle in hand, the game of cat and mouse ensues as a wild wind storm sets upon the island.

From a long-distance perspective, The Wind should be a raucous good time. Meg Foster, Wings Hauser, a Greek island, and a sickle wielding slasher. If anything, this is a recipe for one delicious film particularly once someone tells you that the style of the film is a mixture of European atmospheric thriller and American style slasher. While all of those elements are true and often accounted for, like so many of Masteroiki’s films, there is just too much inconsistency and a lacking sense of narrative push that undermines what the film has to offer. The blend of styles certainly adds some distinctive fun to the matter, particularly in the use of the Greek island and a(nother) completely unhinged performance from Hauser, but the momentum and urgency of the film runs flat.

Stylistically, Nico Masterokis does deliver on the promise. There is a combination of atmospheric European visuals mixed with stalk n’ slash American elements embedded into every scene. There’s a mystery to the plot about the killer at first and yet that same mystery is so obvious that it leans right into the slasher tropes. The use of the setting, the storm, and the house is truly the best part of the film though and while Meg Foster tries to carry the film with her quippy dialogue and piercing eyes the film just has a better sense of style than substance. It’s this part of The Wind that makes it the perfect kind of cult film.

The Wind is filled with plenty of fun ideas and moments, a tactic that truly defines most of Nico Masterokis’ films, but the overall experience is one that doesn’t resonate past the style. Cult cinema fans will love what the film has to offer, particularly if you are a fan of the Greek exploitation maestro, but The Wind represents more of a missed opportunity for something spectacularly cool rather than a fascinating footnote. Still, Arrow delivers on this Blu Ray for fans and for anyone even mildly interested I would suggest picking up this release. 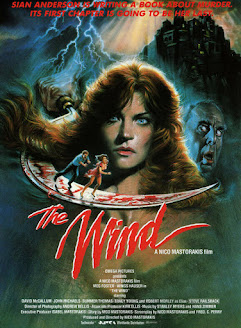 Written By Matt Reifschneider
Posted by DarkReif
Email ThisBlogThis!Share to TwitterShare to FacebookShare to Pinterest