Gamera: The Complete Collection (2020) [Gamera Vs Barugon, Gamera Vs Gyaos] 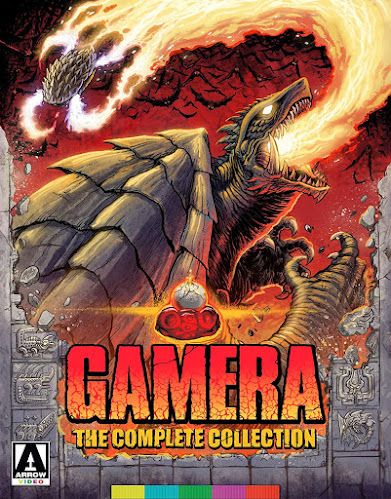 To give even more power to this reclamation of everyone’s favorite jetpack kaiju, Arrow Video has amassed a massive new collection of all 12 of Gamera’s films. With the original run of 8 films, the 90s trilogy, and the final film – Gamera the Brave from 2006, this collection features them all. This series of reviews for the set will go briefly through each entry and then recap at the end thoughts and opinions on the set itself. Considering the number of films included, this series of articles will definitely be as massive as Gamera, but will serve as a guide to all the films.

When it comes to the Gamera franchise, it’s the second official film, Gamera Vs Barugon, that certainly divides audiences. However, as I’ve now revisited this franchise a few times now, it’s the one that increasingly grows on me with every watch. As far as a kaiju film from the mid-60s is concerned, it’s one that aptly hits all of the main points with a vigorous fervor. There’s plenty of science fiction elements with giant diamonds and heat rays, plenty of kaiju action, and a plot that sees our heroes attempting to partner with Gamera to defeat the greater of two evils – Barugon. However, it’s how the film approaches the structure and hitting these narrative/plot beats that makes it a love it or hate it entry into the franchise.

After Gamera Vs Barugon quickly retcons the space ship ending of Gamera, by having a random meteor strike the ship and unleashing Gamera back on Earth within a few minutes of recapping the last film, it unleashes or Shellashish anti-hero on a Japanese dam where it consumes the electricity before flying off to, like, eat a volcano. It’s obvious from the first moments of new footage that this film had a much larger budget and there is a cinematic sense to shooting everything in the film that gives it a more serious tone. However, the film quickly shifts gears away from Gamera and into the main plot – the origins of Barugon. The film then spends the next 30-40 minutes digging into a backstory for some human characters that has them accidentally bringing back an egg (shaped like a jewel) to Japan and accidentally unleashing Barugon.

Already, the film is far more interested in developing and unleashing Barugon on its audience than necessarily having Gamera come blasting back to kick some ice lizard ass. To its benefit, the crocodilian like kaiju with a chameleon tongue, ice breath, and the ability to shoot rainbows out of its back is a fascinating one and the subsequent human efforts to defeat the creature take up most of the remaining run time of the film. In fact, Gamera doesn’t even show up again until almost half way into the film drawn by the energy of the rainbow – again, this is weirdly asinine, creative, and fantastic wrapped into one. Then, the tusked turtle doesn’t show up again until the last 10 minutes of the film for the big end battle.

This is why the quality of Gamera Vs Barugon is debated. It spends large amounts of its run time with the people and the main villain and rarely with our titular anti-hero. It’s also a much darker film in tone, more adult, and takes its time to set up the plot for the kaiju fights. For me, it wears its bigger budget on its sleeve, delivers more heart, and feels more concerned with telling a well-rounded story than just delivering on the thrills and kaiju spills and that effort is a winning combination. It’s occasionally silly, but the rest easily make up for it. Also, as another side note, this collection does come with the alternative American cut of this film, War of the Monsters, which does significantly trim down the human portions. So if you’re one that things the film is too long, feel free to dig into this alternative cut. 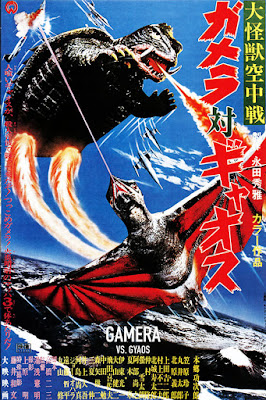 Working as a direct result to the rather disappointing box office that Daiei saw with the second Gamera film, Gamera Vs. Gyaos changes a handful of approaches to the execution to maximize its concept for its audience. As a result, this third film is the one that really starts to define the formula that would be the basis for the entire franchise. It sticks with what was working and often pushes it to the next level to give audiences what they want. It’s a more briskly paced entry, more vibrant in its visuals, and features an iconic villain kaiju that would become Gamera’s main reoccurring nemesis – Gyaos.

The first change compared to the previous entries is the return of director Noriaki Yuasa after being replaced for the second film. Many of the themes and choices he made with the first film return for this third one and it marks a deviation (or return to form, depending on how you view the franchise) towards the formula he wanted to establish in the beginning. Once again, a kid plays one of the main protagonists, the human plot is very much a secondary plot – one that is definitely a forgettable land development thread, and the film moves quickly to get the monsters onscreen and duking it out. I will admit, I quite enjoy how it’s the kid who is the one that ends up explaining Gamera and Gyaos to all the scientists and military personnel.

With a brighter visual scheme, including teal lit caves and bright colorful monster blood, Gamera Vs Gyaos works as the entertaining and more family-friendly film it’s intended to be. Gyaos is a pretty badass villain, particularly with his supersonic slicer, bloodthirst, and awkward land screeching from his V-shaped head and the multiple battles between the kaiju leave one very satisfied. The script isn’t as tight as one would hope, but what it lacks in-depth of writing or more artistic layering it makes up for in sheer fun to deliver the necessary components of what someone would look for in a kaiju film.

Written By Matt Reifschneider
Posted by DarkReif at 9:02 PM