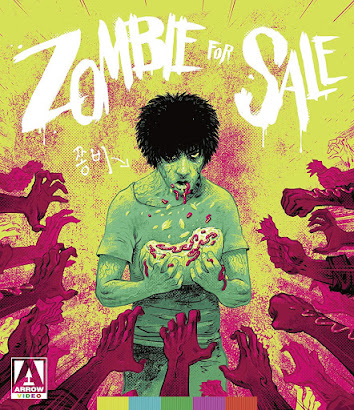 Also Known As: The Odd Family: Zombie for Sale

Now that South Korea has solidified themselves as a place that delivers some fantastic zombie films, including the recently released Peninsula which is raking in some serious dough at the foreign box office, it only makes sense that a western distribution company would grab a zombie comedy (zom com) to capitalize on the boom. The subject for this review is Zombie for Sale and the distribution company in question would be Arrow Video. Now, as a preface to this review, I should mention that I am not the biggest fan of comedies, nor am I the biggest fan of zombie films. Thus, a zom com is not the kind of cinematic experience that I necessarily look forward to. Just go look at my review for Yummy from a couple of months ago. Yet, as soon as Zombie for Sale started marching through its familial caricatures, silly set up, and eventual eruption into zombie chaos, the film revealed itself as fully engaged with its material and charm oozing out of most sequences.

Through the charming execution of its broadly painted concept, Zombie for Sale is able to navigate so many of the usual tropes and pitfalls of the genre-bending style. The film is firmly rooted in its comedy first, a tactic that allows the story and narrative, about a questionably shady family who stumble onto a zombie wandering around their small town, to establish its characters and quirky setting. While the initial zombie appears immediately in the narrative and plot, the manner that he stumbles around, being chased by a dog for a large portion of the opening sequences, or haphazardly trying to kill people with little success, is fully played for comedic bits. The tactic works though since the cast and crew seem fully dedicated to selling the tensely humorous relationships for the family and the little world that they live in. Highlights of this portion of the film, prior to their discovery and attempts to capitalize on their newfound zombie and his powers, is all through their banter and interaction. Right down to how the film has one character explain zombies to his father by having him watch clips from another South Korean zombie flick, Train to Busan.

The horror of the film rarely rears its head until the final act, when the full out zombie apocalypse starts to spread, and even then the film is more focused on the dramatic impact of the family trying to survive and find a way out than it does on the horror set-pieces. There are some entertaining moments to the rising action of the film, but horror fans will probably not find a ton to love as the film focuses on its other genres. When it is aiming for horror and tension, it’s mostly the zombie basics of being swarmed and the potential of being devoured. Due to its strong direction, some great cinematography, and entertaining performances, Zombie for Sale gets away with far more than it should have in these regards. It's notable though that the comedy comes first, second, third, and the horror comes fourth. It's not inherently a terrible choice, particularly since the comedy and performances carry so much weight, but it's something to be aware of for people walking into this film for the first time.

As with so many of Arrow’s releases, Zombie for Sale is a fairly stacked release in terms of features. The full list is below and for anyone interested in South Korean cinema, zombies, or comedies, then this release comes highly recommended. The most valuable feature I found was the fun video essay by Pierce Conran for his analysis on satire in South Korean cinema which adds a glorious layer to the film for multiple rewatches.

Ultimately, Zombie for Sale is a film utterly powered by charm and strong execution of its silliness and social commentary while using the zombie formula to explore its themes and ideas. There is very little true horror to the viewing experience which is something to note for fans looking for that perfectly balanced zom com, but it’s not a deal-breaker thanks to its strong sense of visual punch, entertaining set pieces, and relentlessly firing banter and jokes. Truthfully, while not a perfect film, Zombie for Sale is the best zombie comedy since Shaun of the Dead, just for the sheer energetic outpour of its style, tone, and delivery. It’s highly recommended. 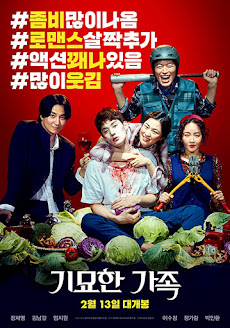 Q&A with director Lee Min-jae from a 2019 screening at Asian Pop-Up Cinema in Chicago, moderated by film critic and author Darcy Paquet