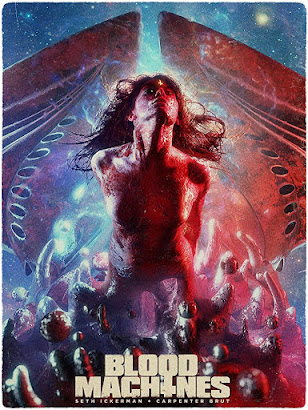 It would be both easy, and understandable, to want to call Blood Machines surreal, to say that's it's an experiment of style over substance. I don't even think you could call someone wrong for saying so, although I don't agree. For one, the plot is firmly rooted and consistent with its lore. Admittedly, it's exceptionally dense lore with no entry point, no exposition, only what you infer from itself and its predecessor (we'll touch on that momentarily), and what you osmose from official sources and a little bit online. In a way that would make it more in line with something like Primer, though not as pretentious or narratively satisfying. More emotionally so perhaps.

The real best place to start is with French Synthwave music, or more specifically Carpenter Brut. After releasing three EPs, collected on an LP known as Trilogy, Brut started a working relationship with French directing duo (under a single pseudonym) Seth Ickerman, loaning his music to a trailer of theirs leading ultimately to Ickerman directing all of the music videos from Trilogy. Of those, the video Turbo Killer captured the imaginations of both fans and Brut himself, leading ultimately to a film sequel in the form of Blood Machines. I think this context is an important lens to view this movie through, as it informs the style and sound of it. Despite the obviously deep and seemingly well-thought-out universe, there is very little dialogue and everything, especially the climactic set-piece, is set to great metal and horror-inspired synthwave music, scored by a returning Carpenter Brut.

The story, such as it is, is that in deep space a rogue AI has crashed on an alien planet. A pair of rogue AI hunters, so-called "blade runners" (no one accused it of being subtle just vague), have followed the ship "Mima" housing it and when a mysterious group of nomads confronts the hunters and seemingly gives the Mima's AI a human form the captain of the ship takes one of the nomads hostage, killing the others. Defying orders from his superior to salvage the ship the blade runners instead chase the Mima's AI, a being they do not understand.

All of that is secondary to the style that this film oozes. Going back to the Turbo Killer music video, purely visually it tells the tale of an AI captured by a blade runner, rescued by some sort of a vigilante with a cool gothy gas mask with glowing eyes. It has the look of an eighties movie in both the senses of its "throw it all in and a kitchen sink" approach to mixed aesthetics, (with everything to Celtic knot rose and inverted cross motif, the clearly fascist look of the AI hunters, and muscle car chase that ends up on the exterior of a ship in space) and also in the actual look as if it's a well-worn VHS recording. Outside of the latter, the visual style connection in Blood Machines isn't immediately apparent. The first thing we see is the runners' ship, a salvage ship that looks almost like a creature; an alien creature that's all mouth and teeth, like a cacodemon from Doom, or more accurately like the monster from the old Stephen King miniseries The Langoliers if that reference tracks for you.

Whether or not they did, it definitely looks like they built everything practically or in miniature, as things have a stunning gravity to them. All the more impressive as everything becomes more and more bombastic, as they chase the AI to a ship graveyard that all leads to one of the most visually exciting climaxes I've seen in a while, juxtaposing ballroom dancing with epic space combat.

Blood Machines definitely isn't an experience for everyone, but if you were ever curious about what a goth Baz Luhrman space opera would look like, this is a pretty cool example.

Written By Sean Caylor
Posted by DarkReif at 9:49 PM

Email ThisBlogThis!Share to TwitterShare to FacebookShare to Pinterest
Labels: Shudder