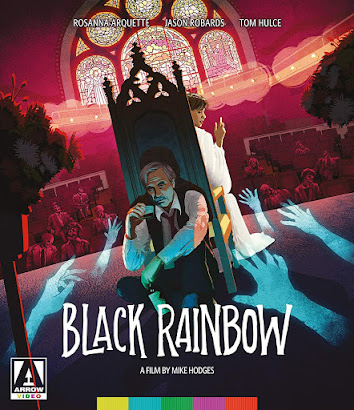 “We steal if we touch tomorrow. It’s God’s.”

Quite frankly, when Arrow Video announced that they would be releasing a new Blu Ray release of Black Rainbow, I had very little expectations. Arrow has recently been tipping their hat in the direction of the slightly supernatural dramatic thriller, in particular, their release of Apprentice to Murder works as a perfect double feature with this one, and it’s something of a lost genre that deserves a bit more attention. Black Rainbow is a film that ably slides through the various elements of genre, delivering on just enough dramatic heft, thematic commentary, character study elements, and an assassination plot to be a thoroughly enjoyable film with just enough layers to mark its audience. It’s never a film that defines itself as the most stylish or most intense, but it’s subtlety in its depths and strength in its small moments make it an overlooked diamond film from the late 80s.

Black Rainbow is a film that one could easily write off because of its subtle genre-shifting. It never strikes a firm stance in any one particular genre. Ultimately, it’s a thriller, but that’s such a generic place to put anything. It’s also a character drama, a supernatural film with tinges of horror, and it’s a southern gothic tale. The studio obviously had trouble deciphering what to do with the film because of this, eventually booting it to cable after letting it soak in a purgatorial release state for a few years. Having watched it a couple of times, it’s not shocking. Hodges toys with a lot of very large ideas here, where a young medium (Arquette) finds her powers shifting from being able to speak with those on the other side to being able to see horrific events that will kill people in the near future. The supernatural elements are played almost with a nonchalant attitude in the beginning and it’s only when a reporter starts following her and her manager father (Robards) around that it digs deeper into the toll of these talents and the exploitation that goes with them. By the final act of the film, there is a full-on dream like quality to the film and the film unveils its thoughtful parallels, concepts, and “naturalistic” insights. It’s a hard film to pin down, but one that makes attentive watching and analysis a fascinating exercise.

It’s an incredibly loose film in all manners though and that goes along with much of its execution. As mentioned, Hodges plays with the ideas in subtle ways in terms of narrative storytelling, but style goes along with that. This is not a flashy film and even often when it seems natural for the film to lean further into that territory, it actively pulls away from it. The bookends of our reporter looking for Martha, the medium, in the country feel superfluous at first, but oddly come around to pack a punch for example in the reveal. Another one would be Martha’s visions, which are never expressly shown as some directors would have done, but the film allows Arquette to full embrace the emotional burden that they place on her in the moment and often the camera will stick regularly to her face and body as she transverses her abilities. The performances, in general, follow this same tone. The film will often lead the performance in one larger way, but then pull back for a more intimate moment. The relationship between the three main characters is often understated and it leaves the audience filling in gaps which lends a more artistic merit to the material.

The Blu Ray release features a ton of new material, including a new restoration approved by Hodges, so it was a delight to scan through it to build more understanding about the film and the overlooked nature of its existence. As always, my vote for the best feature goes to the commentary provided by Samm Deighan and Kat Ellinger, which provides incredible insight, history, and discussion about the film. Truthfully, it’s a must listen to understand this film and why it is what it is.

Black Rainbow, for all of its unique choices, still exists as a true cult gem. It’s not a film for everyone as its slow narrative and refusal to take the path of least resistance makes it a strangely difficult watch if you’re not invested or unable to buy into its subtle craftsmanship. If you are willing to leap into it, it’s one hell of a fascinating and fulfilling cinematic watch. It’s clever in its writing, breaths life into some off beat generic characters, and adds just a pinch of unusual perplexity to its execution that keeps the audience with it. Black Rainbow is another enigmatic surprise that Arrow has brought forth and it comes with a hardy recommendation. 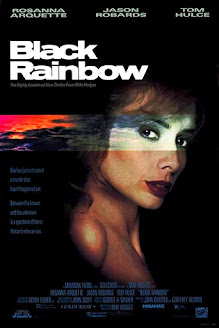 Written By Matt Reifschneider
Posted by DarkReif at 6:05 PM