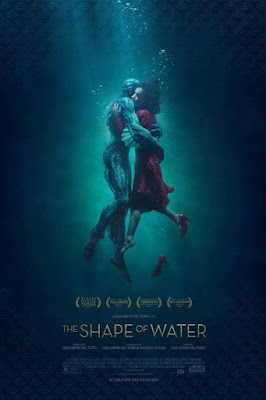 If you’re a reader of this site, then you already know that Guillermo del Toro is one of our favorite directors in modern cinema. His continued intentions of crafting modern love letters to genres and styles of bygone eras while maintaining his own style and a refreshing fantastical spin on those tropes. For these reasons (and a few more), The Shape of Water was very intriguing. Initial trailers made it look like a pleasantly different spin on the classic Universal monster flick The Creature from the Black Lagoon (one of my personal favorite films of all time) and that alone made it a must-see flick for the year. However, The Shape of Water is far more than that. Like many of del Toro’s other films, this one is a unique blend of various genres threaded together with an immensely effective use of thematic material and written for maximum audience resonance. It doesn’t always play things by the book, thankfully so, and it might be abrasive for more mainstream audiences, but it’s hard for me not to say that this is another masterpiece of cinematic craftmanship from one of the industry’s finest voices. The Shape of Water is stunning from its visuals to its content and it’s not to be missed.

It’s necessary at this point to address the fact that The Shape of Water is not necessarily a science fiction or horror film as some of the marketing made it seem. This film is rooted, like most of del Toro’s films, in fantasy first. From the way that the film opens, using Richard Jenkins’ friendly marketing neighbor Giles as a voice over that doesn’t say, but might have said “Once upon a time…” in so many words, The Shape of Water adheres to the fantastical elements of its story. The manner that the film narrative unrolls, using romantic text and a nod to detailing that makes it feel as though it’s another world existing on top of Baltimore of the early 1960s, allows it to take a lot of cinematic license with its characters and tone without necessarily betraying its own universe that it creates. Brilliant visuals, powerful set designs, and inherently believable characters only further create this world where fantasy meets period set reality and del Toro navigates it with the utmost of ease. The film takes plenty of chances with its characters and narrative as it goes, further pushing boundaries with some abrasive elements of sexuality and violence that got verbal reactions from my theatrical audience in the screening, and it blends the consumable nature of its charm and build with artistic leaps of faith to defy expectations. It’s not a film out to trick its audience, but The Shape of Water certainly knows where its audience is going and does not hesitate to shift them into some surprisingly effective territories of cinematic style and shocking narrative skips. Genres can not classify all of the style and tonal shifts that the film uses, so don’t let that bind your expectations.

Of course, the film also has a series of threaded themes that make all of its more unusual traits feel truly impactful when partnered with the plot and style of the film. Like the previously referenced Creature from the Black Lagoon, the core concept of the film is an analysis of how man – and not the creature of the film – is more monstrous than anything the creature could ever represent. This is most obviously fleshed out in the film’s villain, Colonel Strickland – played with screen devouring depth and intensity by the ever enigmatic Michael Shannon, but it goes much further than that. All of the protagonists, fighting against not only Strickland, but the nuclear Caucasian male centered concept of America in the early 1960s that exists as a system around them, are those that don’t fit into that model. Our main heroine Elisa, a mute woman working as a janitor for the government facility that houses the fish/man creature and played with brilliance and versatility by Sally Hawkins, states at one point that the fish man never looks at her as anything but what she is and doesn’t see her as less than perfect. It’s heartbreaking as the audience already has come to love this woman by this point. This threads through the rest of the cast, the also previously mentioned Giles as her homosexual neighbor and her co-worker and friend Zelda, played with screen stealing charm by Octavia Spencer, as an African-American woman who must take plenty of racist remarks from those around her. There’s a sense of how these characters have to fight the system to help this fish man who cannot help himself in this situation and it’s fantastically executed. There’s plenty of other symbolic elements layered into the film that are open to interpretation by every member of the audience, so this review won’t go into all of them, but it’s an aspect of The Shape of Water that truly allows the narrative and its meaning to resonate well beyond the time that the credits role. The kind of feel and depth that lifts a film above its parts to be something memorable and impactful to those who consume it.

Simply put, The Shape of Water is one of those special cinematic art pieces that merges its messages with an effective narrative and then executes it at the highest of standards. It’s entertaining, heartfelt, surprising, consumable, and abrasive. It challenges its audience, but does it in a way that doesn’t reject them but instead invites them to go on this fantastic journey where nothing is ever quite as simple as it seems. This is Guillermo del Toro soaring as a director and storyteller, using multiple genres and its fantastical narrative layered on real world issues, to deliver a film that is as striking as it is honest in its intentions. The performances are stunning and the visuals sublime. The Shape of Water, like its title, is an ever-shifting force that fits the vessel of an audience as they hold it and it’s that kind of magic that makes it one of the best experiences to have in the theater this year.