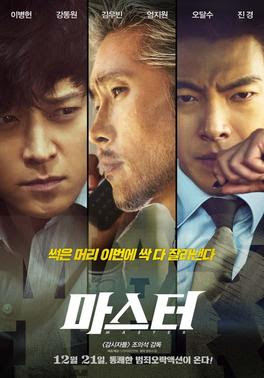 At this point, the South Korean market is so good at making thrillers that it’s setting the bar too high for them to even keep up. Master is the victim of that bar standard. If this film was made in Hollywood, it was easily be one of the best that Hollywood has made this year if not in the last handful of years and yet, compared to the two kinds of thrillers that South Korea is producing, it feels occasionally disjointed and safe.

Master tries to be a complex socio-political-economic thriller as it takes two heroes and pits them against a financial criminal mastermind, played with impressive swagger by Lee Byung-hun, who is running a massive pyramid scheme. This is problematic, outside of being ambitious, because it’s very dense material. A plethora of various characters, two leads, and enough plot to make two movies. Two movies that are jammed into one. The first hour is purely set up, but it’s built like its own film and reaches a natural climax and everything. The second half then jumps ahead six months (or more, as memory seems to escape me at this moment) and proceeds to build an entirely new plot where our leads must re-team up to find the baddie AGAIN and hunt him down. It’s a ballsy maneuver for the film, but it’s a lot to consume for a two and half hour piece of cinema. Respect, for sure, but also not perhaps the most efficient maneuver when both pieces could have been fantastic films on their own. On top of that, the film is neither the dark and ambitious thriller nor the overly entertaining and hammy ones that South Korea is known for producing. It tries to be both and in that effort, does go far enough in either direction. For many fans, this riding the line will be wonderful for consumption, but ultimately for this reviewer it felt like they didn’t want to make a choice one way or the other and it’s a tad disappointing.

Outside of those two things though, Master is a solid viewing experience and I can see why it’s one of the top grossing films in South Korea. The performances are all spot on, highlighted by a fun and entertaining performance from Kim Woo-bin and a subtle screen stealing performance from Jin Kyung, and the manner that director Choi-Ui-seok handles the pacing, tension, and explosive action set pieces is something to be admired. It’s a film that’s impressively executed on a script that felt like it needed to make more defined choices and perhaps be split into two films. Perhaps with more viewings the film will feel more settled into what it is for me, but for now I have to admit I was slightly disappointed when I compare it to other South Korean thrillers. It’s still good and borders on great, but I expected phenomenal and that can a deal breaker. After receiving a handful of recommendations for Asura: The City of Madness (does it need the subtitle? Does it?) I ended up picking up the film when it received a US release this year and threw it on my watching queue. Naturally, it took half a year for me to finally get around to the film, but I feel silly for putting it off for so long. Not only is Asura one of the best action films of the year, it’s one of the best films of the year...period. Asura is a film that takes the usual tropes of an anti-hero cop, one caught in a world where the police, criminals, and politicians are all held in place by thin threads, and gives it a well-executed and wickedly dark offbeat neo-noir spin.

While it seems to be the usual for a South Korean thriller to excel in performance and in production values, Asura is a film that takes its darker elements and injects them with a brutal, nihilistic comedic spin. I am all for dark comedies, in all fairness, and it’s Asura’s ability to be funny while being shocking, heartbreaking, violent, dramatic, and exciting that lifts it above many of its peers from the year like The Prison or Master. The key performances all ably navigate the nuances of the film’s ability to slide between tones, particularly from the lead anti-hero played by Jung Woo-sung and Hwang Jung-min as the film’s charismatic and horrifying villain, and the film will not hesitate to keep its audience on edge. The lead character’s almost chaotic and unguided flight through the narrative, often unhinged and never in control despite forcing his influence on a variety of factors, is as anxiety inducing as it is perplexing and fascinating that eventually explodes into moments of well shot and diverse action set pieces that highlight the film’s ability to leap genres when needed.

As one of the hidden gems to be plucked from shelves in the US in 2017, Asura: The City of Madness is one of the best. It’s vicious, sad, hilarious, and audience devouring as it plays out and those familiar with the style of South Korean cinema will immediately want it for their collections, while those with an open mind to abrasive foreign cinema will also find a diamond in the coal of direct-to-home-video genre material.

Written By Matt Reifschneider
Posted by DarkReif at 8:20 PM