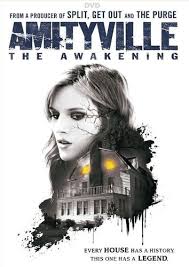 With the release of “The Amityville Horror” remake in 2005 and the found footage horror hit “Paranormal Activity” in 2007 it was only natural for an official Amityville film utilizing the found footage aspect to be announced and Dimension films put “Amityville: The Lost Tapes” in the pre-production pile. When news hit a wave of unofficial “Amityville” films hit the home video market jump-started by the Asylum’s release of “The Amityville Haunting” in 2010 which, not surprisingly, steals the found footage idea. This made it extremely confusing for horror fans trying to decipher the official releases from the unofficial home-made junk as the word “Amityville” is the name of town and cannot be copy-righted so essentially any joe shmoe making a home movie can slap the word “Amityville” into the title and try to sell it off to unsuspecting horror fans. (Below are visual charts aimed at helping people decipher official Amityville entries from the unofficial trash).

While the tidal wave of unofficial “Amityville” junk flooded the market, Dimension’s production of “Amityville: The Lost Tapes” was put in limbo. The producers eventually dropped the found footage aspect (thankfully) and decided to go with a traditional film look under the new title “Amityville: The Awaking”. But the production problems didn’t end there. The film was completed in 2014, only shown to a select few test audiences and then shelved due to mysterious circumstances. 3 years passed by and “Amityville” fans like myself (yes, it is embarrassing to admit) wondered if the film would ever be released, and if it did, was it going to be any good? Did Dimension shelve it due to it being a poor film? To my surprise it did get released this year but only to a limited theatrical run before being dumped onto the streaming market for people to see, get this, for free before eventually getting a DVD and Blu-ray release. So was the film worth the wait after its troubled production… well…. 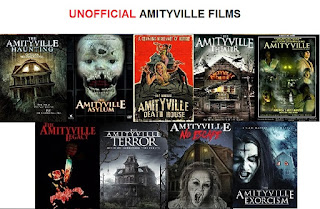 Now that we know “Amityville: The Awakening” is an OFFICIAL “Amityville” film and with the release of “The Amityville Horror” remake in 2005 one would think it is safe to assume that this is a sequel to the remake... still it’s not that simple. Much like the sequels “Texas Chainsaw”, “Children of the Corn: Genesis” and the upcoming “Halloween Returns”, this film is an entry into the ORIGINAL franchise before the remakes making it the ninth entry into that mile long “Amityville” franchise. To make matters even more confusing (as if it weren’t enough already) it is a Meta film, making reference to the ‘films’ of the original “Amityville Horror”, “Amityville II: The Possession” and even the remake. This means the original Amityville films are actually movies in this films universe with “Amityville: The Awakening” taking place in the ‘real world’. 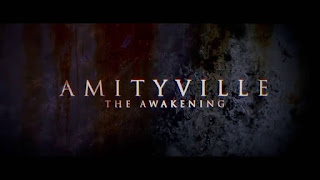 So what we have here is a family with a comatose teenage son moving into the notorious house with a troubled past due to it be located near the hospital for his care and for the low price of purchase. The mother (played by Jennifer Jason Leigh) unwisely decides not to tell her teenage daughter of the houses bloody past and of course she finds out through school classmates. It’s not long before strange supernatural occurrences begin to happen and it seems the house is trying to possess the comatose brother, utilizing him to murder his family in the same vein as Ronald Defeo did before the iconic haunting. Can our unruly teen convince her borderline psychotic mom before a massacre occurs? 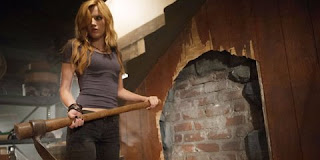 Unlike the a majority of the later sequels with plots that revolved cursed items from the house, it is refreshing for a plot that takes place within the wood framing of the actual house itself. The acting is decent and the direction by Franck Khalfoun (the “Maniac” remake) is adequate for the most part but where he has trouble is building up the tension and scares. Far too often the he resorts to low quality jump “scares” and poor CGI instead building up tension and atmosphere to well-earned pay-offs. Perhaps I am just spoiled by the recent masterful haunting films like “The Conjuring” from James Wan. Another problem, out of the director’s control, is the obvious post-production tinkering by Dimension films. Apparently the original test screenings of the film were far more exploitative when it came to nudity and violence. The new PG-13 version for wide release shows obvious censoring with awkward cuts, poor flow, short running time and a tacked on ending. A personal problem I had with the film was the decision for Meta story telling. The references to the films “The Amityville Horror”, “Amityville II: The Possession” and the remake (amusing as the characters pass on watching the remake as remakes ‘usually’ suck, ironic since the director got his start directing a remake) were humorous but took me out of the film. They could have done away with the Meta and made it a straight up sequel and the film would have worked out just fine without the distracting ‘wink wink’ to the audience. 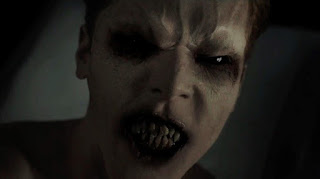 Considering all the production problems, delays and nit-picks, “Amityville: Awaking” didn’t end up that bad and far better than general consensus dictates. I heard horror fans calling it ‘awful’ but horror fans in general can be the harshest critics. It’s merely an okay film and when it comes to the official “Amityville” series in general, it’s one of the better entries. Perhaps with less post production tinkering, producers seizing control and better direction when it comes to tension and scares it could have been a good film instead. As is horror fans could do FAR worse (like all those home-made unofficial “Amityville” films), just don’t expect along the same quality as the haunted house films made by James Wan.

Written By Eric Reifschneider
Posted by Cronosmantas at 10:48 AM