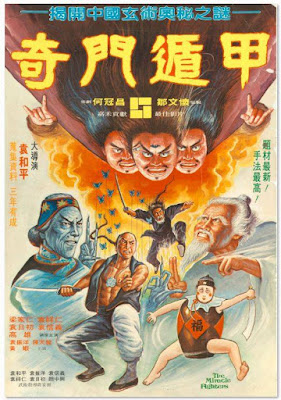 Even in the various social circles that focus on kung fu films that I frequent, The Miracle Fighters is a film that receives mixed emotions. On one hand, it’s a film that is massively creative and often impressively dedicated to its blend of humor, action, and fantasy. It’s also a film that doesn’t quite find the right balance between those genres as it jams as much entertaining material as possible in its hour and a half run time. Yet, it’s a film that was popular enough to spawn two sequels and an upcoming ‘remake’ in The Thousand Faces of Dunjia (which hits select US theaters this December from Well Go USA) so there must be something to the film, right?

When it comes to The Miracle Fighters, it’s a film made up of a lot of great moments and smaller elements to a whole that feels ultimately underwhelming. Even when the film is hitting some of its basic tropes, a story about a young man who gets caught up in a political coup of sorts by the vicious villain Sorcerer Bat, it never settles in many of the ruts that may have come with its basic kung fu story. This is because, layered on top of that, the film has no real adherence to its plot. The narrative streaks in a lot of different directions, even going as far as changing who is the main protagonist between its acts. Entire sequences are added in for the sake of a joke, including most of the training in the second half between the young man and wacky “kung fu magicians” that he ends up with and that doesn’t even start to touch on just how distinctly disconnected and wild the film is in the final 20 minutes. The fact that The Miracle Fighters is so outrageous is somewhat refreshing, but it also lacks the cohesive element to actually develop its characters and embrace the emotional moments of its plot. Fun, yes. Resonating beyond the joke, not so much.

As both a positive and negative, the film has a wonderful cast and it features the iconic Yuen Woo Ping in the director’s chair. This allows the film to embrace some of its oddities with a wickedly intentional confidence. In particular, Beardy, who plays the older kung fu magician, steals this film with his character. Even when the film is building him and his rival, the old lady kung fu magician that lives across from him, for apparently no real reason, it’s a breath of fresh air and his story and strange relationships with other characters steal almost every scene they are in for The Miracle Fighters. If only some of the other actors and characters had more development outside of their gimmicks, then this film might have built a tidy little foundation around its corny jokes to be much better overall. Yuen Woo Ping does his best as a director here, using some practical effects and fun editing to sell the “fantasy” elements of the film and balancing the diverse choreography of a half dozen individuals, but no matter how much effective and fun action sequences he pumps into the film, it just doesn’t overcome the problematic script and scrambled narrative.

For kung fu fantastics that are looking for a wild and entertaining flick to burn some time, The Miracle Fighters fulfills that need. It’s ambitiously creative with its silly gimmicks and doesn’t hold back by the last 20 minutes where it goes completely off the rails of logic, but that doesn’t necessarily make a great film outside of being entertaining. The characters, particularly the young man, are formulaic at best and thin at worst, and it’s only the gimmicks that come through more than any truly inspired emotional resonance. Except for the strange relationship between the two older kung fu magicians. There’s a strangely effective story there. It’s definitely not a traditional martial arts film in a lot of ways, but in its disregard of the tropes it also loses a lot of heft in its writing and characters. The Miracle Fighters is the perfect cult film in a lot of ways and those who are interested should definitely check it out.