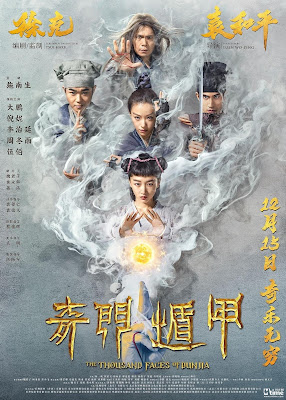 In preparation for the release of The Thousand Faces of Dunjia, I went back to rewatch the comedic fantasy martial arts film that it was supposedly a loose remake of, The Miracle Fighters. If anything, it was meant to get my mind into the general tone of the outrageous schemes of the nonsense comedy meets martial arts style and also as a refresher on the plot. Perhaps this wasn’t the best idea because The Thousand Faces of Dunjia, outside of being directed by the iconic Yuen Woo Ping and being sold as a loose remake of The Miracle Fighters, is far more in line with modern Tsui Hark films than Yuen Woo Ping films. This should be obvious since Tsui Hark wrote and co-produced this film, but even then, it came as a bit of a surprise as the film focuses almost fully on the fantasy spectacle of its story rather than the martial arts elements like other fantastical Yuen Woo Ping films like True Legend. The Thousand Faces of Dunjia is a spectacle driven fantasy opera, brimming with charm and powered by sparkling chemistry between its characters. It’s also a film that uses these elements as a crutch for its sporadic script and uneven narrative. Also, as far as I can decipher, it has nothing to do with The Miracle Fighters. So take those initial comparisons out of your mind.

On the surface, The Thousand Faces of Dunjia works as an entertaining, popcorn blockbuster that’s primed to sweep the box offices in China. It’s visually robust and bright, delivering a fun and spirited story about a hidden society of powerful martial artists who have stumbled on an “alien” invasion that is going to conquer the world. The plotting is silly and it makes no qualms about embracing that (to which I’ll write more about in a second), but the manner that it’s shot and portrayed is electrically empowered and sparkling with chemistry. The performances are all fun, accomplished in that Hong Kong manner of blending heart, humor, action, and a smirk that runs akin to modern Stephen Chow films, and the various characters – at least the leading ones – all interact with an off the cuff manner that feels natural and fluid even when it’s obvious that most of the things around them are CGI. There is even a slick romantic subplot that works to give the film some depth that’s layered with plenty of comedy to keep the audience hooked into what it has to offer. Yuen Woo Ping only showcases his style in some of the more intimate moments between these characters while the rest feels a lot like modern Tsui Hark and the popular CGI explosions of fantasy that is popular right now in China. If there’s anything to take for the film, it’s energetically fun and is just overflowing with spirited chemistry.

The problem remains that if one was to strip away all of the charm and the strong casting, the film is built on some very unstable foundations and many of the focuses are cinematic fluff. The Thousand Faces of Dunjia relies far too much on the charm to carry its characters, the plotting is uneven, and the tone can be scattered. The film has to dump a lot of information in its opening to get the audience on the same page of where the film is going to open and as it plays out it tries to craft this larger fantasy universe that has its own set of rules. The problem is that those rules, despite all of the time setting them up, seem loose and inconsequential. Powers between the characters are seemingly undefinable or random and the sense of danger, which is needed to sell the immense power that we are told the two aliens possess, seems fleeting as it increasingly throws new powers and dangers at the audience. The reliance on CGI adds to this ungrounded issue for the script and there are all kinds of plot twists that seem muddled and undefined to how it will truly affect the characters or their various plot lines. By the time the third act roles around, the film had somewhat become white noise – even in the wake of some fun and peppy action sequences - and when it ends in a sudden way it was more perplexing than gasp inducing.

Fans of the modern style of big popcorn and easy to consume Chinese blockbusters will find enough charm and humor to carry The Thousand Faces of Dunjia. It’s a fun film with some great chemistry between the characters and the performances to handle those add a lot of depth to a rather thin script. It’s a great way to burn off a couple of hours if that’s all you’re looking for. However, in the grander scheme of things, it’s also a film that is very problematic in its writing and tonal issues. It relies too much on spectacle as substance and the plotting and narrative are muddled as it sprints through to an end that never feels like a finale. The Thousand Faces of Dunjia is fun, but flawed. In my personal opinion, it was too much Tsui Hark and not enough Yuen Woo Ping.