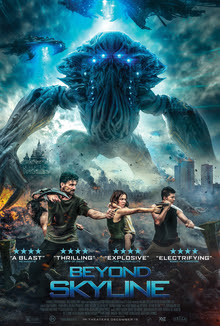 Most critics and fans found the first Skyline to be a mixed effort, if not straight out disappointing. When the sequel was announced, it was then somewhat surprising. Skyline wasn’t even a box office hit overall either, so why make a sequel? Outside of the cliffhanger ending of the first one, it was hard for me to justify this film’s existence even when I saw the robust action cast in it. That is, until I saw it. Specifically, Beyond Skyline improves on the one thing that the first one had trouble embracing – it’s B-movie foundation. Instead of trying so hard to be a tense and intimate science fiction horror film, Beyond Skyline shoots for the stars and just leaps into being a full on entertaining vehicle for broad stroke characters and outlandish plotting.

At times it can seem a bit too cheesy for its own good, particularly when they introduce a plotline about saving a baby that carries through most of the film, but between the almost frantic pacing (seriously, this film hits a full sprint 10 minutes in and never really slows down) and a final act that takes our hero, played by the ever-awesome Frank Grillo, and transplants him in Southeast Asia to team up with drug smugglers, including Iko Uwais and Yayan Ruhian of The Raid fame, Beyond Skyline delivers action and fun in droves. The film even starts to fringe on some fantastic kaiju vibes as giant monster vehicles are introduced for the aliens. Don’t invest too much in many of the cliché character beats or hammy plot conveniences needed to keep the film at its brisk pace. Just enjoy it for what it is as a film that knows what it is and delivers on those silly promises left hanging by the ending of the first film. Beyond Skyline a wild film and all the better for it. 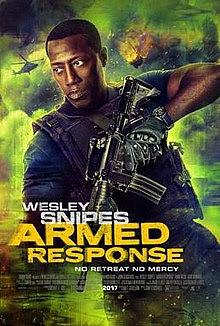 Sporting a tough looking Wesley Snipes with a machine gun, a chopper, and green toxics looking fumes, Armed Response made it onto my queue simply on that alone. Having the director of the entertaining Kickboxer: Vengeance helped sure, but that cover made a promise for cheesy B-action fun. Which is perhaps why I was so surprised when Armed Response was more of a horror movie than an action film. Covering the exploits of a reconnaissance team sent into a hidden military site called “Temple,” Armed Response attempts to be a kind of mystery wrapped action flick where the paranoia grows between the members as supernatural and ghostly acts occur around them. At the foundation, it sounds decent enough with plenty of the right pieces to make a solid film. Unfortunately, that’s also not the case.

Armed Response is a film that never rises above being a disappointment. All of the stronger concepts it has going for it, parallels about haunting and the sins of war, are sidelined for cliché characters and predictable plotting, Wesley Snipes is sidelined for a glorified cameo with only one overly edited fight in the film, and the tension and tone comes off as generic and ill-fitting in the end. Even with its clever Event Horizon-lite idea, Armed Response never sets itself apart as anything but mediocre at best and that’s a huge problem for the film. Don’t be fooled by its cover or even its intriguing concept, Armed Response is a dud that never takes off and stumbles at the gate. 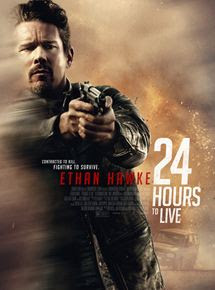 The power of execution can be everything in cinema. There are a lot of scripts out there that are often riddled with issues or do not rise above the usual tropes to be something worth filming. There are films that use those scripts and lift them to being something far more than they ever should have been through the execution. 24 Hours to Live is one of these films. Even based on the trailer, it seemed obvious that this film was bound for B-action movie realms, taking the now cliche concept of a hero with a limited frame (in this case, a surgically implanted counter on his wrist) racing to accomplish his heroic task, and just giving it a slightly modern look. The script is very much of this caliber. Outrageous hidden criminal organizations, a world hopping plot concerning Interpol, and the previously mentioned assassin with a heart given the time limit on his life. This is B-action movie territory and as much fun as that can be, it didn’t inspire a lot of faith that it could me more than that.

Yet, as the film opened with some heartfelt chemistry between Ethan Hawke’s Conrad and his father in law played by the always reliable Rutger Hauer, it already was lifting its material up. It hits a lot of tropes, but it executes them in such an effective manner that they feel fresh even when they aren’t. The dialogue and writing flows and feels natural, the production values are that of a theatrically released action flick, and the direction takes the entire thing more seriously than it should have. There are layers to the film that the performances and visuals add, the characters feel grounded and motivated in some of their odd decisions, and the narrative blends entertaining B-action with dramatic heft in surprising ways. The film is anchored by Hawke, who at this point should just be declared as a national treasure, and he’s surrounded by other actors and characters that allow him to really dig into the character and the film’s themes. There are running threads about family, loyalty, and forgiveness that resonate through the silly plot elements and it kick starts 24 Hours to Live into being one of the biggest surprises in action films for the year. Seriously, don’t judge the film on its title or its trailer. It’s a far more slick and effective. It definitely gets a recommendation.