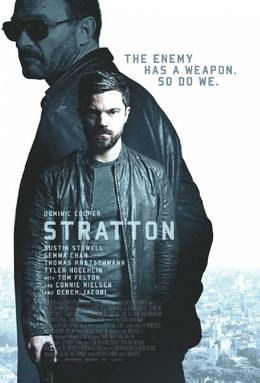 There’s a part of me that sincerely feels bad that Simon West has essentially dropped into the straight-to-home-video realm. Sure, most of his films are glorious B-movies anyway like Con Air and The Expendables 2 with a few questionable ones to add to the mix (*glares at my copy of the When a Stranger Calls remake on my shelf*), but often enough he’s a much stronger director than people give him credit for. His latest film, after the disappointing Gun Shy that just came out, is the espionage film Stratton, which is based on the popular book series. Stratton is a shocking West film though. Shocking enough, that I had to watch it twice to truly appreciate what it was offering after I started it. For all of the great B-action movies that West is known for, Stratton is much more serious and grounded than expected. Reading the synopsis, it sounded like a low-budget James Bond film, but in reality, it takes its Bond-like concept and grounds it in a much more dramatic and subtle espionage thriller akin to Jack Reacher. Yes, Stratton is an effective merging of James Bond meets Jack Reacher. That’s not a sentence I thought I would be typing, but in the end it’s true.

However, with its more grounded approach to style and character, viewers will have to acclimate their expectations going into the film. It’s the reason it took me two watches before I felt comfortable writing this review. The opening sequence smacks directly of its James Bond inspiration as SBS agent Stratton, played with a much more subdued and subtle element by Dominic Cooper, teams up with a Navy Seal to go into Iran and destroy a biological weapon of mass destruction under the radar. There’s some silly plot devices to kick up the tension, including a random “there’s something in the water that’s eating the seals on our air tanks!” under water sequence, but for the most part director Simon West has fun with the film here and delivers on some great action as things go awry and the biochemical going missing.

However, this sequence feels slightly different in tone than the rest of the film until the final sequence. Stratton, after this Bond-ish opening, pulls back quickly to start and develop the lead character and give him a lot more dramatic depth. It builds some of his back story, the film adds a few new characters and develops the relationships between them, and it creates a more realistic universe to develop its espionage thriller plot. The film has a fantastic cast and some interesting layered characters and the one thing that deters them from soaring is the rather brisk pacing of the film. At a crisp hour and a half, it never quite spends enough time to really develop the team that surrounds Stratton to truly maximize the strengths of its casting and script. Some of the emotional core elements suffers from it, even if the pacing does move quickly enough to never lose momentum for more casual film watchers.

For a director known for B-action flicks, Simon West handles the thriller and dramatic elements quite impressively. Even when the action gets more ridiculous, like the previously mentioned underwater sequence or a finale that takes place on a non-speeding bus, West really does keep it mostly in line with the overall more serious and grounded tone. Particularly on multiple watches, the talents of West shine through as he utilizes the budget and talents onscreen to make the most of what could have easily been a film that collapsed under its ambitions. Not only is it kind of surprising, but it adds a layer to West as a director that I’m not sure I ever expected.

Stratton is a film that defies its own script at times, balancing the charming and over-the-top international espionage elements of a James Bond film with the more dramatic and grounded thriller tones of the Jack Reacher films. Simon West showcases some talents that he hasn’t really shown before in his films, overcoming the shortfalls of his last few films, and the film is a big surprise in quality. It has some issues, particularly in its trimmed pacing and stripped-down script, but with a couple of viewings it already has grown on me as a film. For fans of the director, Stratton is a film that needs to be on the viewing queue. It’s an impressively effective thriller that deserves more attention. Definitely one to add to the collection when it comes out.