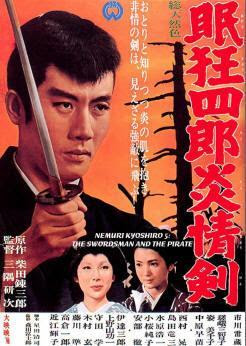 Aka: Nemuri Kyoshiro 5: The Swordsman and the Pirate


By the time that the Sleepy Eyes of Death franchise hits its fifth entry, the series has already seen its fair share of quality shifts and unique approaches to its series formula. It started off on some questionable and pulpy ground, but found a balance between serious artistic merit and those pulpy entertaining pieces with the last few entries. This balance of the previous films is what makes the fifth entry, Sword of Fire, such an intriguing one. Mainly because it’s a film that strips back a lot of the more entertaining elements for a starkly serious thriller tone. Where previous entries use some strong faced characters, snappy dialogue, or dynamic settings, Sword of Fire opts for a ‘less is more’ approach to things and plays its script in subtle ways. For fans of the series, it’s perhaps one of the less memorable ones due to these choices even if the film itself is impressively handled.
For those familiar with the franchise, Sword of Fire is going to be more comparable with the last entry that director Kenji Misumi directed which was Sword of Adventure. The second film of the franchise saw the series pull hard away from the pulp and deliver a much more robustly layered and thoughtful character driven entry. This is the same whipping motion of intent that Sword of Fire performs after the brightly colored and pulpier previous film. So just keep that in mind when leaping into this one.

Don’t let the more serious tone and subtle approach fool you, this film still stands firm in many of the formulaic structures and narrative choices that this series has come to fully embrace. Namely, our anti-hero Kyoshiro, is still the often nihilistic and complex character that the series uses to its benefit. Raizo Ichikawa continues to impress in the role and, in particular, his subtle use of dialogue and body language partnered with Misumi’s dynamic sense of holding moments make him the core reason that Sword of Fire works. There are these artistic moments where the themes of greed and the human condition come to the forefront in this partnership, including a moment where Kyoshiro is speaking the working at an inn that fades into a montage of the greed and systematic issues that exist in the streets just outside of the inn. It’s this beautiful direction from Misumi and that character that set Sword of Fire aside as a well made film, tonally and visually.

One of the bigger issues that arises with this entry is that many of the secondary characters are not nearly as memorable as those from previous entries. Only the femme fatale character, which becomes the antagonist thread throughout the entire film is all that memorable, but she isn’t nearly as dynamic or layered in her writing as some of the other foes/companions that Kyoshiro has tangled with in the past. This is part of the subdued tone of the film and its more grounded intent, but it’s one that works as a double edged sword. Instead of the broad stroke characters, the film doubles down on its conspiracy plot and narrative flow, throwing our anti-hero into a complex situation to untangle. Once again, Kyoshiro is treated as a pawn by much of the plot and it’s watching him manipulate, slice, and power his way through it that pushes the film forward and keeps the film from feeling too even and too intentionally pulled back.

Even though this film doesn’t make an impact immediately like the last few entries, Sleepy Eyes of Death 5: Sword on Fire is one that resonates well beyond its credits. It’s a film where its threaded themes of greed and manipulation for it echo off of Riazo Ichikawa’s iconic performance and the meticulously shots and tone crafted by director Kenji Misumi. The more that it sits with me, the more I love the film. It may not have the immediate charm of some of its predecessors, but it makes up for it in artistic depth and that’s something impressive for the fifth film of a franchise.

Written By Matt Reifschneider
Posted by DarkReif at 8:24 PM