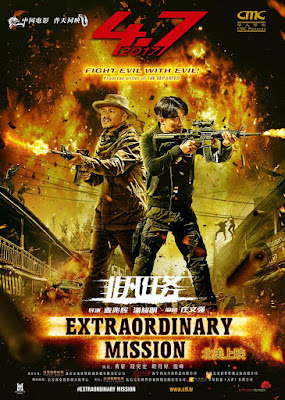 With a title like Extraordinary Mission, it was easy for me to assume that this film would be much more along the lines of a cheesy action film in the veins of Switch, The Adventurers, or even Kung Fu Yoga. However, that’s just based on the title. Cause, you know, it’s kind of a tongue-in-cheek title. While there are certainly elements of the cheesy film that Extraordinary Mission could have been through its plotting and occasionally 80s Hong Kong action inspired action, the film is much more serious and artistic than expected. It’s still entertaining and often dramatically effective, but it does occasionally struggle in balancing it all and comes off as uneven. For Chinese action fans, it’s still a film that hits a lot of the right buttons, but it’s also one that’s torn between two worlds.

It’s immediately clear that Extraordinary Mission is meant to be taken very seriously and wants to recreate the modern blend of artistic focuses on Hong Kong action. Think newer age Johnnie To in how it introduces its lead character, an undercover officer trying to infiltrate a large and complex drug ring, and proceeds to paint the morally gray areas around his life and those around him. Visually, this allows the film to be a stunning one. The cinematography, lighting, designs, and diversity of settings makes Extraordinary Mission one of those films that’s just beautiful to consume. Whether it’s the contrast of the night exchanges on docks, the brightly lit jungles of the Golden Triangle, or the dirty alleys of the city, this film is just impressively shot and it adds a lot to the atmospheric and artistic tone that directors Alan Mak and Fletcher Poon are aiming for in the film. It has that Johnnie To look down and for that it gets some serious recommendations.

From there, Extraordinary Mission is all about the execution of its design in the items on the screen. The performances are often nuanced and deeper than expected, particularly from the “villains” of the film which range from scarred drug dealers nesting in the jungles to corrupt police officers, and when the film gives them the time to develop it creates a fascinating web of deceit for the film to exist in. The same goes for the action sequences, which will occasionally burst out of the thriller foundations into some tense car chases or brutal gun battles, and Mak and Poon shoot them with an obvious love for the HK style of over the top moments done with artistic intent.

Yet, despite all of these huge selling points for Extraordinary Mission, the film has a very mixed tone and script that undermines a lot of the great things about it. This is a script that’s as cheesy and often formulaic as expected, throwing in some of the most random twists for the sake of twists in the last half while it leaps overdrive. The first act also feels like it could have been its own film. To develop the backstory of the lead, the undercover operation he is involved in, and the relationships with the characters around him, Extraordinary Mission has to rush through these to get the audience caught up to start to develop the latter portions of the film. It’s a complex narrative and at times can be too much for its own good. It’s ambitious, impressively so considering it covers much of the basics of HK cops n’ robbers cinema, and it can be too ambitious with how much it’s trying to cover.

Still, in the end even with the mixed tone and overambitious plotting, Extraordinary Mission is a blast to watch. It has enough of that fun HK material to be entertaining and still maintains that modern artistic spin that will appeal to fans of Johnnie To and his followers. The performances are impressively layered, the film is beautiful to look at, and there is some classic HK action that bursts out of the usual thriller builds to deliver some over the top action. Going in with the right expectations helps the film, so keeping that in mind only benefits the viewer when they are digging into what Extraordinary Mission has to offer.

Written By Matt Reifschneider
Posted by DarkReif at 3:54 PM