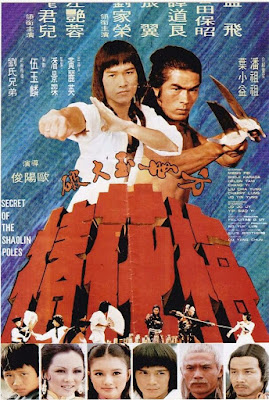 Truthfully, I waited much too long to watch Secret of the Shaolin Poles. The film has a lot of great things to hook a fan of martial arts films including a rather impressive cast that includes Mang Fei, Lau Kar-Wing, and Kurata Yasuaki and action direction from the iconic Liu Chia-Liang (Lau Kar Leung). Just those two things should have made the film one to seek out, but a lacking legitimate release hindered my enthusiasm for the film. Still, despite the poor quality of physical material – including the usual and often unintentionally humorous dubbing and horrifically cropped frame work that rears its ugly head in the final fight sequence at its worst, Secret of the Shaolin Poles is still an impressive kung fu flick.

Following the adventures of a cocky and rebellious Fong Sai Yuk, played with impressive range by Mang Fei, the film centers around his return home to find his two brothers who have been murdered by the villainous Commander Ma. A villain who has hired a vicious Japanese assassin, the ever impressive Kurata Yasuaki, to set a trap involving the titular Shaolin Poles to defeat the iconic folk hero. Shit goes awry, a body count rises, and the stage is set for Fong Sai Yuk to once again fight the good fight against corruption and villainy. Honestly, this is Kung Fu 101, as many of these films tend to use as their foundations, but the execution is strong Secret of the Shaolin Poles. The performances, even when over the top, are memorable fun and effective, the story goes to surprisingly dark places, and the tropes of the genre feed into a solid story that embraces its characters and narrative. It occasionally rushes through some of the stronger secondary plots, including one with a Fong Sai Yuk impersonator that has a lot of potential if it was developed further, but overall the pacing works for what the film has to offer. The highlight of the film though is truly the action, thanks to the crisp and strong hand of Liu Chia-Liang, and it’s a shame that often the cropped frame of the version I watched cuts out some of the more dynamic movements and spacing. Between the sequences on the poles and the eventual hero/villain duel though, the film still features some fantastic material.

All in all, Secret of the Shaolin Poles is a must see for kung fu fanatics. It has great characters and performances, crisp and dynamic action, and a slick narrative that never feels stale even when it’s adhering to the tropes. Here’s to hoping that this is a film that someday get’s a little love and a much better release. 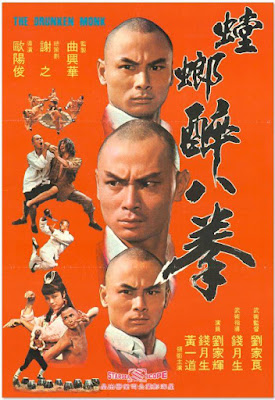 After watching Secret of the Shaolin Poles and being impressed with the results, I immediately went to my collection to see what other potential classics I had missed from this director. The first film that popped out to be was Shaolin Drunken Monk, starring the always solid Gordon Liu with action crafted once again by, you guessed it, the immortal Pops – aka Liu Chia-Liang (Lau Kar Leung). The combination caught my attention, along with the promise of Gordon Liu as a drunken shaolin monk, and the film immediately went into my queue as the next martial arts film to watch. Fortunately, it holds up to a lot of its promises as a classic of the genre. Not only is the film fun in its relentless action set pieces, which does feature Gordon Liu using drunken fist technique in a couple of sequences, but it has a strangely effective emotional center in its paint-by-numbers plotting.

Shaolin Drunken Monk occasionally follows its tropes a bit too closely, following the son of a slain master, the titular character played by the impressive Gordon Liu, as he attempts to get revenge on the students that rose up to kill his father by kidnapping the daughter of the villain in an attempt to get him to come out into the open. It’s predictable in its main plotting points and spends a bit too long in the second act focusing on a flashback for the hero as he trains in drunken fist with a hermit that constitutes most of the usual training sequences, but it’s made up for in strong execution of its more powerful moments and strangely effective romantic subplot. The action, again this is Liu Chia-Liang we are talking about, is wickedly fact and spectacularly diverse considering the lower budget of the sequences and their simplicity in concept. Especially in the finale where all holds are let go in a fantastic layered fight. The film’s romantic angle though is perhaps the most surprising highlight as the limited screen time and development of the female character, who has very little character build outside of a few moments, gives some depth to the story. Enough so that in an almost Chang Cheh inspired moment at the end, there is a oddly dark and sad moment that hangs as the “The End” card pops up.

Don’t let Shaolin Drunken Monk slip by you as it did for me for so many years. This is one of those impressive classics of the genre that doesn’t come from one of the major studios of the period. It uses its talents to power up its strengths so that its flaws feel minuscule in comparison, even when the formulaic plotting and narrative come into play. It’s entertaining as hell and has a decently impressive emotional core to appease kung fu fans.