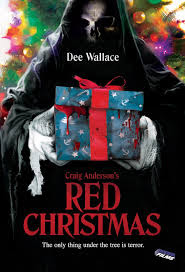 Holiday themed slashers are all the craze right now and in indie, low budget horror it’s thriving. After watching films like All Through the House, A Christmas Horror Story, and having films like Good Tidings and Better Watch Out on my upcoming queue for the season, it felt proper to watch at least one during the Halloween binge I had in October. That film was the Australian film Red Christmas. Oozing with style, this controversial topic emblazoned slasher is pure exploitation (Ozploitation) and yet executed with absolute intent on being taken seriously as a horror film meant to stir a debate and it’s here that perhaps the film will either win its audience or lose them, as any truly effective cult film will accomplish. In that sense, it’s hard not to praise Red Christmas even if it has its problematic moments and pieces. Its intent is executed with style.

To address the most obvious and complex aspect of Red Christmas, it’s perhaps best to let a viewer know that the film is centered around the abortion debate. Matriarch of a layered and rather young family, Diane, played with intense vigor by horror icon Dee Wallace, brings her whole family together for a last Christmas in the family home. Her husband has since passed away and her family is not necessarily on the best terms with one another, yet she gets all of her kids and their significant others together in an attempt to bond them. Their gathering is not without its problems and the biggest one is a strangely bandaged and cloaked man named Cletus that arrives on their doorstep claiming to be the survived child of a botched abortion looking for Diane. As it would seem, revenge is the present he brings to this Christmas gathering.

As one would assume, the film essentially cascades into the slasher formula from this point. Red Christmas handles its motivational foundation for the killer in a rather unique way, balancing the sheer oddity of exploitation (a character that looks like the classic rendition of death who proceeds to just slaughter his family in gimmicky ways) with the pro-life/pro-choice debate. At times, Red Christmas seems more intent on stirring emotions and generating controversy with this approach, yet at the end of the credits it references all kinds of documentaries and other references on the topic for its audience (not that many film goers stay until the end of the credits anymore as they should) and so it handles it rather smartly in a way too. This review is not necessarily the place to have this discussion as the film embeds some interesting plot twists within the concept as it pertains to the characters, but it’s best to know that this is a core piece of the emotional resonance of Red Christmas and that it’s best for some viewers to be prepared before watching.

With that out of the way, let’s talk about Craig Anderson’s very, very impressive style that he uses for the film. Red Christmas, being as it takes place in Australia, doesn’t have the benefit of the snowy landscapes to craft the Christmas tone needed for the film, so it is accomplished through the bright colored washes in and outside of the setting created by the colored Christmas lights. At times, it accomplishes a Suspiria level of intense color and emotional crafting for the film and it works like a charm. Partner this with the visual prowess of the director, taking the gritty exploitation style and delivering a multitude of memorable moments, with some of the intensely violent and gimmicky kills (using all kinds of outlandish weapons including an umbrella) and slasher fans are going to truly love what Anderson brings to the table as a director.

Red Christmas occasionally relies too much on its slasher formula to be as inventive as Anderson is as a visual stylist and the exploitative pieces about the villain undermine the interesting (and controversial) motivation at its emotional core. Even with those, the film works. It’s a color washed slasher blast with enough solid performances (Dee Wallace owns in this film) and stylish visuals to overcome its problematic scripting issues and silly looking villain. It’s not for everyone, particularly with its pro-life/pro-choice foundational pieces, but for slasher fans it’s one of the gems of the year and gets a recommendation.