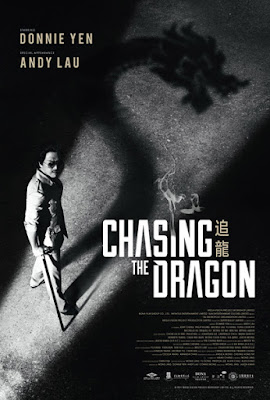 There was a lot of hype around Chasing the Dragon. The ever-present director and producer Wong Jing along with director Jason Kwan were going to take superstars Donnie Yen and the everlasting Andy Lau and develop a remake of the award-winning Hong Kong film, To Be Number One. It’s enticing to say the least. This much talent wrapped into a Hong Kong dramatic thriller was bound to generate this kind of buzz. Enough buzz and hype that it was almost destined to disappoint on some level. Yet, Chasing the Dragon is an ambitious film nonetheless, utilizing its immense onscreen talents to generate a film that is built on some insanely effective moments of emotional power and striking imagery. It’s obvious though that Wong Jing and company take the film too far into its ambitious realms to be as strong as it might have, forgoing the ‘less is more’ mantra to create an epic tone for the film. It’s attempts at being the next Scarface, Godfather, or Battles Without Honor and Humanity are evident from the start and can ultimately be problematic for the film as a whole, but Chasing the Dragon still works as an entertaining and hefty piece of modern Hong Kong cinema.

To say that the film is ambitious is almost an understatement. Chasing the Dragon tells the story of real life Hong Kong drug dealer Crippled Ho with the film essentially covering the time between when he illegally sneaks into Hong Kong to the time when he’s arrested for becoming one of the major drug kings of the city. It’s a lot of time to cover, particularly when the film digs into the complexities of the situations that Ho finds himself in. There are dozens of characters that seemingly shift in and out of Ho’s life and the film has to play its structure and narrative very loose and fluid to be able to hit all of the key moments. It creates a muddled tone to the film, almost dream like at times, that undermines some of the more dramatic set pieces, but it also allows the film to cover that amount of time in a way that isn’t as scattered as it would seem. It allows the film to hit many iconic moments, including sequences where Ho’s family is killed or where a trip to Thailand goes horrifically awry, but it does undermine the natural pacing of his story and it can be very confusing for many viewers as it meanders through the majority of its second act.

Within those moments though, there is a lot to love in Chasing the Dragon. Both Donnie Yen and Andy Lau deliver iconic performances, highlighted perhaps best by their innate chemistry that can be delivered in a sequence mid-credits where they simply speak on the phone. The film settles on this concept by developing their relationship, almost to the degree of a classic Hong Kong heroic bloodshed film, and it knows they are the key to this film’s success. Surrounding them with so many other secondary characters occasionally seems problematic when they are so fantastic and eat screen time like no one’s business, but nonetheless when they arrive onscreen it’s something to behold. If there are two reasons to adore Chasing the Dragon, it’s Donnie Yen and Andy Lau.

On top of that, Chasing the Dragon also has plenty of great action sequences. While the film is certainly billed as a dramatic thriller and the core of the film is such, there are explosive action set pieces that really highlight some of the great work by the directors. Giant street fights, highly choreographed and well shot gun fights, and a surprise duel between Donnie Yen and Phillip Ng (which is fittingly brief, but the action fan on me wanted so much more) make the film surprisingly solid as an action film too. Considering most of the hype has been layered on the performances and dramatic touches, this is a huge selling point that fans should also be aware of as a key part of the film.

Chasing the Dragon is full of brilliant moments powered by some highly ranged performances, some emotionally charged plotting twists, and snapping action. It’s a bit too bad that the film as a whole struggles in developing a smooth and natural paced narrative in its ambitious attempts to cover so much ground with its story. For those willing to embrace Chasing the Dragon for its strengths and look beyond the issues of how its put together rather than the sequences themselves, it’s still going to be a strong contender for one of the more enjoyable films of the year.