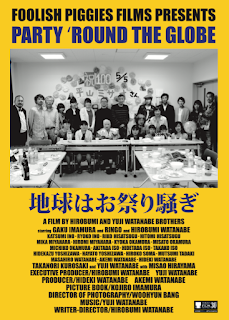 Premiering at this year's Tokyo International Film Festival, Hirobumi Watanabe's forth feature film, Party 'Round the Globe, trots familiar territory whilst also feeling somewhat fresh as it morphs into a celebration of cinema, music, baseball and really just life itself. Does it chart new ground? Not really, but fans of Watanabe's style will most certainly find themselves in for a treat as his gorgeous black and white, witty examination of life continues, this time in a electronics shop.

I absolutely adore Watanabe and his cinematic worlds, and for those who know me, have heard time and time again that Poolsideman, the filmmaker's previous, is easily my favorite film of 2017, and that still stands as we are quickly beginning to draw near the end of this year's cycle. That film took everything I loved about this previous two works and mixed them into something totally original and very impacting. Everything about that film clicked and just worked for me. The social commentary and character study Poolsideman examines crafts and timely and masterful piece of work by a director very early into his career, with his debut And the Mud Ship Sails Away, only having come out in 2013. Perhaps nothing will reach the heights of that film again for me, but going into Party I was excited, and ultimately it doesn't disappoint, though it may perhaps be my least favorite Watanabe outing to date. 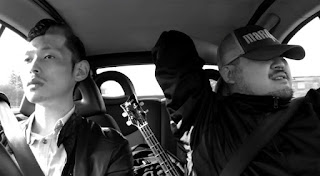 Gaku gives another wonderful lead performance here as the man who never speaks, but his character here is the opposite end of the psyche spectrum that his Poolsideman was. He is wonderful, provides a playful feeling here, and really has a face that screams cinema. I loved watching every second of his colorful performance, regardless of the monochrome tone that the film visually indulges in. Watanabe returns as seemingly the exact same character from the poolside, but provides just as many laughs as he did last go around. The rattling and ranting in the now familiar car ride scenes provide for some great humor and wonderful dialogue. Even some meta references to the director's previous work can be spotted throughout here, and it is glorious, leaving a smile on my face throughout.

The cinematography also remains a high point in the films of Hirobumi Watanabe's body of works. The beautiful black and white cinematography is interrupted during the opening as we get a wonderful voiceover by a child as we see colorful illustrations from a children's book of sorts being played out before us. It's fresh and sets it apart from his other movies right from the start. I wish there had been more throughout, but what we get is truly something to behold and imaginative in every sense of the word. That said, I feel like Watanabe is starting to perhaps get a little too comfortable in his own world he has built. I don't know quite how to explain it as other directors such as Ozu and Hong Sang-soo have done this repetitious overarching thematic exploration, but I really want to see Watanabe chart new territories. This is something I wanted to address, but wasn't and still aren't quite sure how to explain it just right. 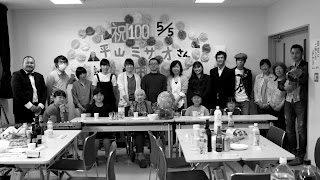 All in all Party 'Round the Globe is yet another wonderful film by one of today's most promising directors. Watanabe has become a favorite of mine and I absolutely can't wait to dive into his next outing, but that said, there was just something about this that felt a little tried. There were some absolutely fresh and beautiful ideas and imagery at play here, but it left me wanting a bit more. I will be revisiting this world again sometime in the future, but I would rather just head back to the poolside or maybe out the farm for another adventure first. Still wonderful, and still very much an enjoyable film. If given the opportunity, do see this one; it's a delight!