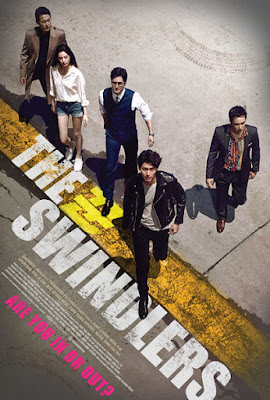 With the popularity of heist films reaching some seriously outrageous heights at this moment, it’s hard to be truly surprised by any of them. Whether it’s the espionage slants of films like Mission: Impossible and The Adventurers or sleight of hand con-films like Bitcoin Heist and Now You See Me, the films all have a tendency to be fairly predictable in their unpredictability. Audiences know that the film is going to trick them, through visuals, narrative, or out of left field spins and they automatically look for how the film is going to do so. This is the mindset that I went in with into South Korea’s next ‘rogue team of con men and women,’ The Swindlers. While the film certainly plays up its strengths of charm with its substantially effective casting and visually appealing look, The Swindlers takes the sleight of hand motives to whole new levels. This is a film built on tricking its audience, along with many of the characters in the film itself, but the layers upon layers of different angles and illusions make it something to admire. The Swindlers is a film that takes its title to heart and sprints with it to the finish unveiling one of the most fascinatingly complex and entertaining cinematic con films to experience.

Like much of South Korea’s recent output, The Swindlers is a film that immediately looks and feels effectively cinematic. For his debut in the director’s chair, although he certainly has plenty of experience as an assistant director, Jang Chang-won piles on plenty of slick high budget visuals and executes a knack for taking the complex narrative and giving it a consumable look. The special effects are snazzy and the visuals are crisp and well defined that furthers the charming elements of the characters and script. This aspect of the film, it’s slick feel, brisk pace, and easy to digest narrative, is key to the success of The Swindlers. It’s not one of those things that ultimately sell an audience on a film, but with a plot as complex as this one – it’s a spoonful of sugar to help the medicine go down.

As mentioned, The Swindlers has an intensely layered and manipulative plot. To really delve into the plotting would betray the intent of the film because it’s meant to be manipulative of how the audience interprets its events. This film is narrative first and plotting second. Repeatedly, The Swindlers will take wicked S-curves with its story, at times completely throwing in twists out of left field and then proceeding to explain them after the fact, and it makes the film an increasingly outrageous and entertaining ride as it goes. The thrills of this layered approach may lose the impact on repeated viewings as the surprises become expected, but the film is executed well enough in this regard that it minimizes that kind of fading.

To add to the charm of the film, the performances and casting in The Swindlers maximizes the consumable nature of Jang Chang-won’s direction and grounds the more eccentric writing that creates the foundation of the film. For an ensemble film, this is a requirement to be a success and the film accomplishes this handedly. The characters are all entertainingly kitschy and the manner that the performances play up villainous or heroic traits fits with the movement of the narrative while the twists keep the momentum going and the charm levels high.

For fans of South Korean cinema, The Swindlers embraces its blockbuster spectacle and gimmicks and executes it with the strong concepts and thriller elements that fans have come to expect. It may not be a film to resonate years down the road with the continued success of the heist films, but the hooks and effective twists of its impressively layered script make it one of the most entertaining films of the year. The Swindlers takes the con man concept to new levels of delightful absurdity and it’s worth seeing just for that reason. South Korean cinema fans and those who love wink-wink thrillers will love what this film has to offer.