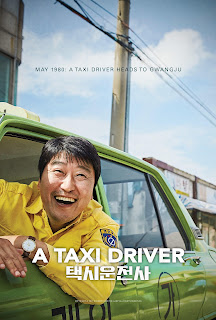 Based on the true story of a Seoul-based Korean taxi driver, Kim Sa-Bok, and German reporter Jürgen Hinzpeter, A Taxi Driver is a cinematic retelling of a cowardly driver turned courageous as he escorts a foreign man into the hellish Gwangju, a city which was undergoing heinous violence and oppression from its dictator government during an uprising in the 1980s, that in which before these two men infiltrated the city, was being kept a big secreted and fabricated into a lie, broadcast to the rest of the country.

Right from the get go, Song Kang-ho has the power to allure even the snobbiest of film goer. He is the definition of a true star, but unlike most stars, at least in the Western reaches of cinema, Song can act like no one else of his caliber can. He's playing his typical goofy and sort of bumbling self, which he has gotten quite good at over the years, but as usual, he is very likable and charming in that offbeat way that only Song Kang-ho can do in the form that he does. 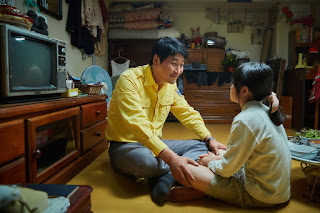 The story of the film is based on true events and while I don't want to get into too much historical context here, is something that very much did happen. A disgusting slaughter of a country's own citizens by it's government in one of the most disgusting acts in modern history. There have been several other films based around this event, without needing to title drop, it's A Taxi Driver that is without a doubt the most successful of all of these said films. It has went on to be in the top 10 highest grossing Korean films of all-time and I can see why.

It is a film that is equally as heartwarming as it is heartbreaking, the perfect mix of feelgood and heavy-hitting drama that equates to very much as successful theatrical run in its home country. The nicer thing about this film coming out when it did is that it very much resonates in the hearts of many across the world, not just Koreans, as others face times of large domestic violence to levels in which some of us haven't quite seen before. Whilst being absorbed in the story and journey at hand, I couldn't help but be reminded of the violence I see in local and nationwide news right here at home. It's sad, but comes as a great reminder that people can make a difference, and further elevates this popcorn flick into something of greater importance and most certainly very timely in its message. 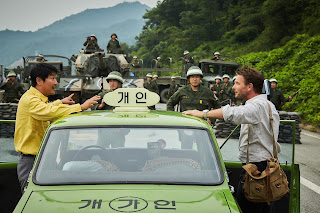 Director Jang-hoon is one of my favorite blockbuster directors from the region and he proves once again that when he has a film coming out, it's one to not miss. I unfortunately missed seeing this one on the big screen, but I can only imagine the impact being further ingrained in me with the proper set up. While the film starts off quiet, when the bloodshed begins to spill in the scenes in Gwangju, and the weapons come out, I feel it would come alive more again with the proper equipment. While it is far more drama and character driven, there is a nice emotionally resonate action scene that takes place towards the end, which is equally thrilling as it is hard to watch.

Going back to the performances, every one here is on point, including Kretschmann, whom I was worried about going in to the film. Usually, Korean films tend not quite nail the nuances of English speaking performers and it seems that half the time that it is just local foreigners that they get in these roles, most of which have never acted a day in their life. Thank goodness they didn't go for a Nicholas Cage. Fortunately I was wrong with my worry and Krestchmann gives a wonderful performance that perfectly compliments Song Kang-ho's central role and when the two's relationship begins to build, you can really feel that sense of companionship and respect the two begin to feel for one another. They both give two of my favorite performances of the year. 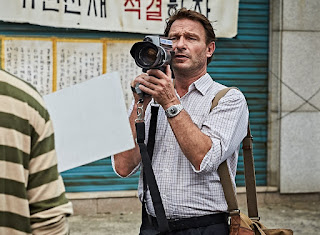 If I had to complain on anything with the film, it would be that it sometimes falls into the realms of cliche and by-the-numbers. The emotional beats are fine, and lies would be had if I said I didn't get moved to tears, as I did on more than one occasion, but some times the music would swell a little too large for its own good, or the grieving of a mother in morning would be a bit too over-the-top in its melodramatic deliverance, but all in all, it really works and does leave the viewer emotionally impacted. It's hard not to grieve and feel the pain that these poor people went through during this brutal massacre. If you don't feel something watching this story as it unfolds, then it's best you don't tell anyone.

A Taxi Driver is one of my favorite films of 2017, and it's emotional core is something that will leave its audience impacted for years to come, and even more delightful is that it sheds light one of the darkest moments in Korean history, and will bring education on an event to people that maybe they weren't aware of. If you are looking for a good tug at the heartstrings or a well-rounded popcorn flick, then this is the one to go with. I imagine it will rack up all kinds of awards this season, and I can say that it most certainly deserves whatever it gets. See it!