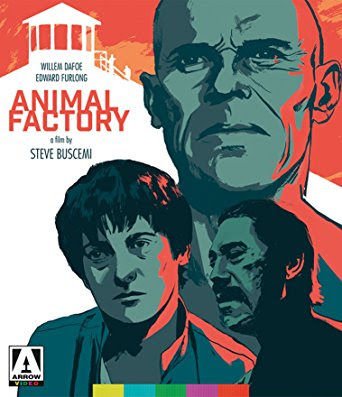 Animal Factory is one of those films that has crossed my path while researching films a handful of times, but I’ve never really bothered to dig into the whos, whys, and whats about the film in any serious regard. If I had, I would have seen that the film contains perhaps one of the most peculiar cast listings ever gathered on film. Directed by cult actor Steve Buscemi, Animal Factory takes its robust cast and goes for a slow burn and realistic story that’s more concerned with the characters and their interactions than a truly thrilling plot or dynamic narrative. At its core character drama, the film succeeds, but when it comes to being something that rises above that one foundational element it refuses to be nearly as entertaining or as dramatically effective with its narrative and story as it might have with the talents involved. It’s a film that certainly has its merits as a dramatic piece of cinema, but the more that it sits with me the more it feels like it could have been so much more.

Now it should be said that Animal Factory is a film that deserves praise. For all of its intentions, the film soars at its focuses. The main one being the relationship between Edward Furlong’s young new inmate Ron and Willem Dafoe’s tenured convict Earl. For the most part, the film is focused on being Ron’s story – starting with his conviction for drug charges and sliding through his time at San Quentin. At times it can have an almost stream of consciousness looseness to its narrative and plot, blurring the lines of how long he is actually in prison and yet at the same time feels like a “slice of life” film that attempts to paint layered characters in realistic aspects. It’s a fairly unique tone, considering the rather realistic elements of its plot and characters, but it works to create the dramatic flow needed to sell the main relationship at the base of the film. It helps that both Furlong and Dafoe deliver performances to define an actor’s career in the film and the latter actor just sparks chemistry with everything and everyone around him.

In this regard, Animal Factory also embraces its rather morally gray area of the film. The audience is shown a rather relatable side to the inmates of this prison, working their way around the rules set in place and developing their own friends and enemies along the way. The film tells us that Earl is vicious, essentially running the prison as his own, but he is almost exclusively shown in a positive light as a man who truly embraces the stronger qualities of those around him and lifts them up. When the villains of the film arrive, one played by a very creepy and intimidating Tom Arnold (!), they make both Ron and Earl look like stand out heroes and it’s an impressive feat to be able to accomplish this task with the writing, direction, and performances.

With all of that being said, there is a sense that perhaps the limitations of the film don’t always allow the film to embrace all it could have been. Animal Factory, with its loose narrative and flowing slice-of-life structure, creates a universe for our two leads to exist in, but only hints at what may have been. For many critics and fans, this is a selling point for this film and in that sense the film accomplishes this task effortlessly. For this particular reviewer, there was a sense that it wanted to go to some unique places, but the structure held it back. Many of the fantastic secondary characters, played by a slew of fantastic actors, seemingly pop in and out of the narrative. The previously mentioned Tom Arnold villain for one is never really built up prior to his arrival and Ron’s original cellmate, a drag queen played with strange effective over the top subtlety (yeah, just writing that sounds weird) by Mickey Rourke, adds an entire layer to the prison world that feels like an afterthought as he disappears by the halfway mark of the film.

Even with that seemingly like a decent hindrance to the film as a whole, Animal Factory remains one of those effective indie cult films that deserves to be seen by cinephiles. Director Steve Buscemi ably brings to life the complex and otherworldly nature of this prison and the resulting key relationship, the layered characters, and career defining performances are reasons enough for cinema fans to add this film to their collection. The fact that Arrow Video released the film with some fantastic special features, which are listed below, is just icing on the cake for collectors. It may not have been the defining film I wanted it to be as a boundry-pushing cult cinema classic, but it’s one that deserves the respect and mainstream appeal it has never really received. 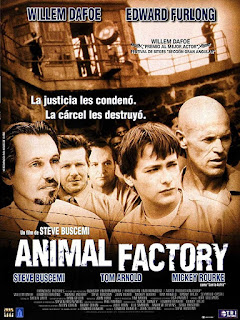