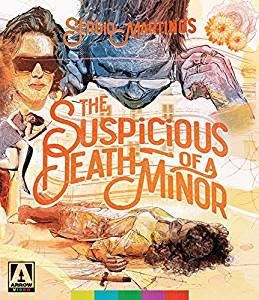 Sergio Martino, like many of his peers in the Italian genre film industry of the time period, was not boxed into crafting one genre. He directed horror, science fiction, westerns, and many kinds of films. Sometimes, he would direct multiple genres in one film. While often The Suspicious Death of a Minor is labeled as a giallo, this film is a lot more diverse than just that one classifier would indicate. It occasionally has trouble finding its own momentum and narrative flow as it navigates the treacherous minefield of genre shifting, but it does leave the audience unsure of what to expect in the film as it unfolds and that does add to the experience of watching it. Through the newest Blu Ray release of the film, courtesy of cult cinema champions Arrow Video, it’s time to revisit one of Martino’s most subtlety odd and intriguing films just to see why it succeeds and falters at its own game.

Initially, The Suspicious Death of a Minor plays out like the giallo genre it’s often lumped in with by showcasing a young woman on the run from a sunglass and knife sporting killer. Martino immediately displays his talent for tension, pacing, and dynamic visuals in the film in this opening sequence to establish the initial mystery. It feels at this point like a classic giallo from the era and as it introduces our lead protagonist, the often frazzled looking and screen commanding Germi played with damn near perfection by Claudio Cassinelli, it continues on this path. However, through some of the secondary characters like the inept police officers on the case or Germi’s right hand man – the thief Giannino, the film starts to inject more comedic elements the further it proceeds into its narrative. Some of it is fairly dark in concept, the film is about the death of an underage woman related to a prostitution and human trafficking ring after all, and it even goes into some slapstick sequences. Germi’s junk car has a door that falls off all of the time leading to some humorous moments that feel out of place in a film of this style. The film retains moments of giallo intensity, sliding in cohesion with the poliziotteschi crime elements, but the film will leap between tension, drama, humor, and exploitative elements almost at random. There’s even a chase and gun fight between the protagonist and the killer while they both are in roller coaster cars while it’s running. If anything, this approach to a narrative structure does feel slightly unique and off putting even if it’s ultimately a frustrating experience for the audience.

Now, the problematic narrative leaps of tone are brushed over nicely thanks to some fantastic moments within the film and the execution of its various elements. As mentioned above, Claudio Cassinelli anchors the film wonderfully as the lead, but he’s surrounded by an impact inducing group of secondary cast that deliver in their roles. Even the comedic moments are executed in a manner that are quite funny, even if the concept doesn’t flow as well as it might have. To add to these performances, Sergio Martino is simply a fantastic director. He develops a visual style that is dynamic and effective, uses the score to layer the film, and develops the atmosphere to maximize the tension and pacing. No matter how difficult the script might be, cliché even, Martino is one hell of a director and usually delivers on that portion of the film.

This release of The Suspicious Death of a Minor is also one to get Italian cinema fans excited. Outside of a new commentary by giallo expert Troy Howarth and some new interviews including one with Sergio Martino, the film is a brand new 2K version of the film produced exclusively for this release. Granted, I have not seen the film before on any other release to do a proper comparison on, but the film looks great nonetheless. As always, the contents of the features on this release are listed below.

As with most things through Arrow Video, the release of The Suspicious Death of a Minor is one for the books. The film itself is more or less catered to those who already appreciate the Italian cinema of the era with its blends of giallo, poliziotteschi, and comedy which can be abrasive and problematic beyond being unique and off kilter in some refreshing ways, but those interested will already know whether or not the film will fit into their collection. Director Sergio Martino powers through the film, using some fantastic performances, and shows why he’s one of the best of the era even when the film he is making is built on shifted foundations. Arrow Video always delivers on releasing films that belong in the more daring cinephile’s collections and this is the perfect addition. Not a perfect film, but entertaining and dynamic nonetheless. 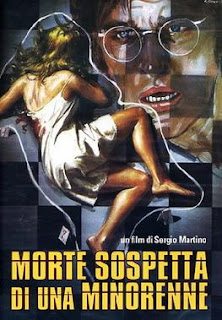 Written By Matt Reifschneider
Posted by DarkReif at 9:39 PM