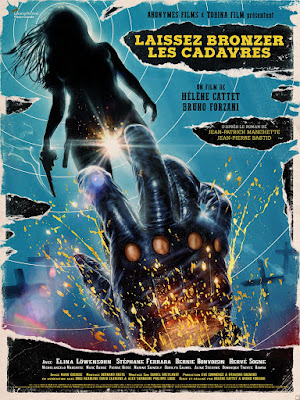 Directors Helene Cattet and Bruno Forzani have already established themselves as vulgar auteur artists. Their first two films, giallo inspired and mesmerizing horror films Amer and The Strange Color of Your Body’s Tears, did divide horror fans with their intense modern manipulation of classic 70s Italian style, but in their efforts they have developed a devoted cult following. A following that I subscribe to. When the chance arose to see their latest film, Let the Corpses Tan, at the Denver Film Festival, I was immediately there. The audience was new to the directors and their style, as indicated when the presenter asked who had seen their work and I was the only one to raise my hand, and, in all honesty, Let the Corpses Tan was a good way to introduce the audience to their work. It’s easily their most cohesive film when it comes to being consumable for viewers and while it still retains their often-abrasive moments of violence, eroticism, and dynamic narrative structures, the film has a lot more dialogue, plot, and defined characters than any of their previous work. And Let the Corpses Tan still soars as an artistic endeavor.

What sets Let the Corpses Tan aside from their previous films though is that the film inherently shifts genres away from being purely giallo influenced. With this film, the duo dabbles in the exploitative action/western hybrid, still pulling heavily in influence from the 1970s Italian scene, and runs in that direction. The film starts off with a vague build about some adults on vacation in some “ruins” outside of town, giving audiences just enough of a connection to build their own assumed dynamics between the ensemble of characters with loose information. This is how the film is going to work, by making the audience work and tease out the minute details of the dialogue to be able to craft the narrative and plot. Yet, it’s obvious right away, particularly from how the title cards are delivered, that this film is going to be a dance between abrasive visuals, sound, and sensory overloads with the lack of cohesive narratives and vague character and plot dynamics. While somewhat strange for an action film, this is the approach and an audience is either going to completely embrace it or completely reject it. And this style is apparent in the first handful of seconds.

Once the film establishes the main players, while occasionally adding in a few more in some off-setting sequences at the beginning of the second act that feels a tad more forced than natural, it kicks off the main conflict that will drive the rest of the picture: our protagonists are actually vicious and violent thieves and we witness them snag some gold bars and attempt to hide out in the ruins they are calling their vacation spot. This, in a naturally cinematic way, brings some police to them and the second half of the film is one extensive, coarse, and wildly entertaining gun fight. Tensions run high as does the paranoia between the members of the crew and the body count skyrockets. This is where the directing duo really get to shine in blending their atmospheric and artistic visual style into new grounds as the film increasingly uses its brisk pacing, leaping narrative, and violent bursts of action to drive the film. The Italian core homages and influences of spaghetti westerns and poliziotteschi films is brought out with a bang. It never loses the Cattet and Forzani feel of artistic visuals and dream like moments, particularly as flashbacks and fantasies occur with the characters caught in mind melting stress, but the film pummels its way forward in perhaps the most cohesive and consumable manner they have ever crafted.

One would not be mistaken if they said that Let the Corpses Tan was a “style first, substance second” kind of film, but in the case of this film it’s not necessarily a bad thing. The core story is a familiar one of criminals and cops, but it’s the style and confidently odd approach to the genre that makes it so unique and impressive. It refuses to play by the rules if the rules are so strict. If the first half makes the audience ask questions, the second half refuses to answer them upfront and gun blasts its way to a finale. If the characters are predictable, it will throw in something dynamic and uncomfortable to pry away the audience from thinking about what will happen 10 minutes later in the film. This is how the film plays the game and it keeps the audience in the moment.

If the film sounds too abrasive with its style, brimming with horrific violence and erotic undertones in stark (yet fully connected) parallels, then it may be hard to buy into its vague and daring narrative. If it sounds like Let the Corpses Tan is artistic and daring, then perhaps you have the mindset to buy into what Cattet and Forzani have to offer with their unique and extreme interpretation of the 70s Italian action genre. It’s not a film for everyone, that’s for sure, but if you want to then load up your gun, grab your gold, and hold on tight for one of the most unique and impressively artistic cinematic experiences of the year.