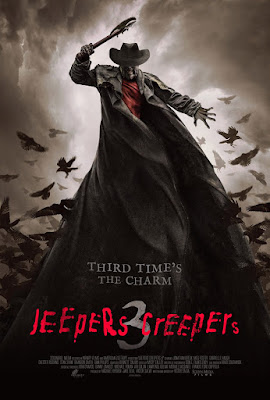 For a little context, I’ve been a huge Jeepers Creepers fan since the original one came out in 2001 and even quite enjoy the second film. They are fun monster flicks with just enough oddities and dark humor to really run with the concept. Since Jeepers Creepers 2 came out, I’ve been anxiously awaiting the third film that has been rumored for years. Whether or not Salva was involved, I really wanted to see this series keep going. Ring in 2017, the year where things go horrifically awry, and Jeepers Creepers 3 ends up getting a one night theatrical showing in limited theaters and then premieres on the SYFY channel. It’s the latter where I was able to catch the film and…truthfully, it’s where it belongs. Not only is Jeepers Creepers 3 a terrible sequel to a surprisingly effective franchise, but it’s one of the worst films I’ve seen this year. To steal a common online phrase, it’s a dumpster fire.

There are even moments during the film where it seems perplexing that the original writer and director is involved with the film at all. That’s outside of the controversy surrounding his crimes. Not only does it have an awkwardly different tone, focusing more on humor and digging into the B-horror elements with less regard to actual storytelling than previously, but it tries to evolve the mythology of the series in further strange ways. The humor is almost all miss, unlike the dark humor that was effective in the first two films, and the film pushes forward further with trying to expand the supernatural elements. The Creeper’s truck is now its own evil thing, able to drive and kill with hidden weapons using a mind of its own connected to the villain. There’s an entire subplot too with previous Creeper body parts that seemingly communicate through…something…with people that touch them. If it sounds silly, it’s not. It’s just plain terrible. The expanded concepts don’t work and only further push the franchise toward Z-grade horror and away from the stronger balances of previous entries. It’s a terribly executed series of half concepts. Not at all the balance or execution of previous films.

Jeepers Creepers 3 is also poorly written. By attempting to take place during the same span of the original two films, it feels rushed and jams in characters left and right that are irrelevant to the plotting and that the audience does not care to see survive the ordeal. The connections to the original two films are loose at best, the characters are paper thin representations of human clichés, and it tries to throw in multiple plots featuring a budding romantic duo, dirt biking teens, a police officer and another Creeper hunter, and a grandmother who sees the ghost of her son that was killed by the Creeper previously. The film thinks quantity of plots is quality of plots. It’s not. Even the arrival of horror icon Meg Foster in the film can’t save the awful dialogue and script while most of the performances are on SYFY levels of cheese mixed with attempts at being too serious for what is being spewed out. If the concept was terrible, the writing matches it blow for blow.

There was already a huge portion of the horror community that was boycotting the film on principal concerning Salva, but the rest of the horror community should boycott it too concerning the quality of the material present. This review was meant to judge the film on its own artistic merits outside of the controversy, but in that regard, it’s a film that deserves to be panned by fans and non-fans alike. It’s a sequel that feels rushed, poorly written, horrifyingly executed, and conceptionally flawed. Jeepers Creepers 3 is one of those films that deserves to tank a franchise.