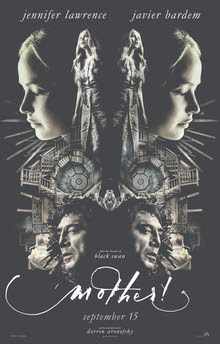 The artistic and atmospheric slant of horror films has seen a burst of activity in the last handful of years and it has garnered quite a bit of attention from critics AND the more casual film goer. This has seen a handful of films that normally would be pushed down to straight to home video status or limited release get a full theatrical drop. Some of these even have full backing support from studios. It’s this success, even on a small scale, that allowed mother! to get a much larger release than expected. It helps immensely when one considers the stacked casting and the appeal of artistic director Darren Aronofsky, but mother! is the kind of film that was definitely going to rub mainstream audiences the wrong way and it’s now well publicized ‘F’ Cinemascore from viewers solidifies that notion. Yet, mother! is not nearly as terrible as some critics and most audiences would have one believe. In fact, it’s an ambitious, provocative, and fully realized piece of cinematic art that pushes the boundaries. In a way, whether one agrees with the choices made in narrative or style of the film, it should be respected as a film that opens up an entire audience to an artistic version of horror film making that they may not have seen before. For that, mother! deserves some serious credit.

On a personal level, mother! is definitely going to be making my list for one of my favorites of the year. The above-mentioned reasons are certainly one part of why mother! is an important film of 2017, but it’s also a film that is impressively layered cinematic treat open to interpretation by whomever watches it. Director Aronofsky has always been the kind of artist to take things to new levels or push boundaries in some kind of manner, but this film intentionally slathers things in a narrative meant to be a spiral of confused emotions, blurred realities, and vague plotting. As simple as the plot seems to begin with, featuring a couple in an isolated house trying to rebuild a life together through full house renovations to create a sanctuary for the husband to write his next poem, it quickly starts dissolving in front of the audience. By quickly, I mean the first few shots of a burning person and house transformations are the initial visuals the audience experiences. Aronofsky establishes this tone right away, brings the two main characters in to create the foundational relationship that the film will be based on, but then immediately starts crafting an atmosphere and paranoid tone that increasingly builds throughout the film. mother! is a film that is narrative first, plot second all the way and it has no issue in embracing that intent. By the time it reaches its third act, the film becomes an abrasive dream where everything is symbolic and ungrounded from the reality set pieces. All I’ll say beyond this on the matter is I hope you brushed up on your religious themes, symbolism, and texts. It’s quite important for interpreting what mother! has to say.

As the narrative unrolls from reality, mother! requires a lot from its creative forces to be able to handle the weight of its script. Fortunately, the detail oriented hand of Aronofsky, who serves as director and writer for the film, handles the blurring of the narrative and the execution of it onscreen with impressive style. What is chosen not to be shown is easily as important as what he chooses to show as the small details all build with the tension of the film to be part of the grander whole. He also packs the film with a very, very impressive cast list of A-listers, Jennifer Lawrence pushes into some territory I never thought I would see her in, and a who’s who list of phenomenal character actors including a slick small role for Stephen McHattie (a cult cinema hero on this site.) All are game for the film, no matter what it requires, with both Lawrence and Bardem absolutely eat scenery each time they grace the screen.

Truly though, mother! is the kind of film that simply needs to be experienced and then discussed after the fact. It’s a robust cinematic phenomenon that’s vague enough in its artistry to be interpreted in a slew of various ways by whomever is watching it. It is hard to call it an enjoyable time as the film is never meant to be anything other than tense, questionable, and down-right horrific. In that manner, it’s a massive success though and it’s one that I applaud Paramount for in their attempt to expose a greater mainstream movie going audience to something not easily consumable. For this reviewer though, mother! is one of the truly unique surprises of the year with its impeccable execution and lofty narrative. It’s not recommended for everyone, but for those willing to dig in with ravenous intent it’s massively rewarding.