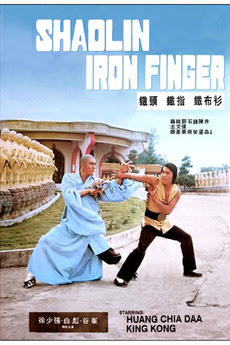 Outside of being a fan of Carter Wong, it was fairly easy to go into Shaolin Iron Finger with relatively no expectations. Yet, even with nothing to get my hopes up for expectations, the film tends to be underwhelming overall and finds itself the victim of a plethora of missed opportunities. It’s a shame too because the core story about a revolution imploding on itself is interesting and the fight work is decently done to be entertaining and fun, but the combination proves to be a mismatch. It’s awkward for most of its run time and not even some clever use of settings and a strong third act of martial arts action can save it.

Granted, as with a lot of these more obscure martial arts films, the presentation of the film can be a bit of a problem. In the case of Shaolin Iron Finger, the dubbing can undercut the more dramatic moments of the film – particularly in the more emotional moments like when our hero is being manipulated into betraying his own rebellion brothers, and director Wang Hung-Chang is not necessarily skilled at provided a fluid narrative outside of that. An awkward opening sequence that features clips from future fight sequences is meant to perk interest, but it just seems cheap (although I should note that this could have been a choice in editing the film for western audiences as it seems like a silly thing a distribution company would do) and there are a handful of secondary plots that need a lot more work to be effective including the various faulty romantic elements that seem to pad out the main conspiracy plot. Fortunately, the film does have decent performances – again, dubbing aside – from Carter Wong and the main villain played by James Tin Chuen to anchor the film on and the fight work builds momentum going into the third act so that when the finale pops up it feels like the film is finally getting to the level it needs to be as it starts throwing in twists and turns in the plot in ridiculous manners.  It’s just too bad that by then Shaolin Iron Finger tends to have solidified itself as a forgettable and underwhelming cinematic affair that only die-hard Carter Wong fans will really want to hunt down.  It’s occasionally fun and interesting, but hardly more than that. 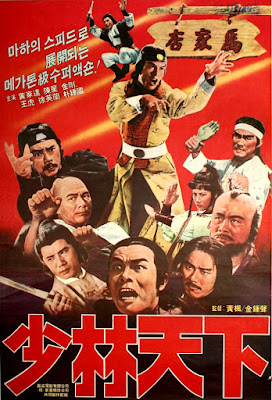 It’s not very often that I get to say this, particularly when it’s these small studio old school kung fu flicks, but The Legendary Strike is highlighted by a surprisingly wonderful script. Yeah, seriously. The best part of this film, outside of perhaps its stacked casting, is that the script is generally well written and impressive when it comes to how the narrative plays out. What starts out like a more mundane kung fu film that features a precious jewel being heisted by the questionable fiends quickly turns into a conspiracy flick where no one and nothing is quite as it seems. The narrative consistently twists and turns, adding and subtracting characters as it maneuvers around its plot, and by the end of the film there are surprises galore and none of them feel nearly as forced as one would expect. The last few minutes seem to end fairly quickly and don’t wrap up the story quite as strongly as the rest of the film runs with it, but it’s a minor complaint compared to the rest.

It should also be mentioned that the casting in this film is stacked. Carter Wong, Angela Mao Ying, Casanova Wong are all in the secondary cast. Angela Mao does get a substantial role that builds after she is introduced at the half way point though which is a huge bonus and she gets to have a decent little fight with Carter Wong at the end which is probably enough to get most martial arts fans to see this film. It's anchored decently by Paul Chu Kong whose “thief” comes off as an admirable anti-hero as the narrative twists and turns. The film also benefits from some decent fight work and dynamic choreography to bring the various conflicts to a head nicely as the film goes on. Interestingly enough, the biggest flaw in The Lengendary Strike is the visuals by the director. Now, the case could be made that the rough copy I watched, which is cropped in some stunningly bad ways, dubbed, and features music that seemingly ends mid scene at one point, can be the reason for the direction to seem poor, but even then it seems like Wong Fung is more of a point and shoot kind of guy that only occasionally uses some fun lighting effects for night sequences to his advantage. He gets the job done, but it’s hardly something that blows the viewer away.

Still, for a film one finds on the Wu Tang Channel of YouTube or on Amazon Prime, The Legendary Strike is a huge and very pleasant surprise. It’s got a slick conspiracy narrative, the characters and performances are decently dynamic and fun, and the fight work is impressive enough to grab any kung fu fan’s attention. It suffers a bit from bland direction, a weird quick end, and horrific cropping of the picture, but it’s not nearly as problematic when a viewer is having this much fun with the film. The Legendary Strike comes highly recommended.