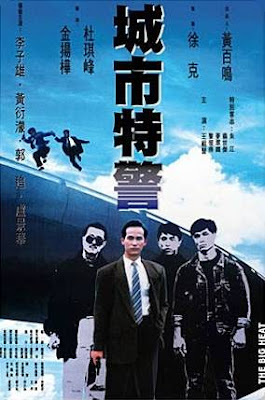 There’s always a sense of shock and accomplishment when one discovers an overlooked diamond of a film out there in the black holes of the cinematic void. This is the feeling that overcame me when I sat down to watch the Hong Kong action flick The Big Heat with my brother the other day. As a fan of the cops n’ criminals genre of Hong Kong action flicks from the 80s and early 90s, I was also a tad shocked that this one has flown under the radar. Not only is this film good, but it’s packed with a phenomenal cast and co-directed by one of Hong Kong’s greatest directors, Johnnie To. The film itself is ripe with wonderful artistic direction, massively entertaining and vicious action sequences, and a darkness to its police team narrative that gives it an impressive depth. The Big Heat, despite its generic title, deserves to be listed among some of the best of the style and belongs up there in the ranks of classics from John Woo, Ringo Lam, and Tsui Hark.

In the grander scheme of things, The Big Heat tells a rather straight forward story about a police team leader looking to take down a couple of corrupt businessmen who had his partner killed while undercover. He puts a team together, things get complicated, and a series of increasingly intense moments lead to increasingly dynamic gun battles and chases. For those familiar with the cops n’ robbers genre, this should seem familiar and The Big Heat doesn’t do a whole lot to complicate matters beyond the usual tropes. The back stories for our police team are decently sparse in the script, only coming to light when the film needs an emotional kick, and it only occasionally toys with formula to create just enough tension to keep the audience hooked into story, including a rather intense mid-second act action sequence in a hospital that goes to some dark places.

The story, despite its straight forward approach, works because the film has very strong talent in its cast and through its co-directors. On-screen, the choices of actors and actresses is a who’s who of recognizable talent (although perhaps not some of the A-list people that more casual fans would recognize) and it carries a ton of the emotional and dynamic burdens of getting the audience involved. The Big Heat is anchored around Waise Lee, who two years prior appeared in John Woo’s A Better Tomorrow and would go on to become one of the great character actors of the Hong Kong scene to this day, and he effectively holds his own as the stern face of the film. He’s surrounded by tons of talent from ex-Shaw Brothers leading man Phillop Kwok (who steals the film with his rather fun banter with one of the other team members) to a fun action cameo from Robin Shou and it gives the film a strong sense of focus and depth that the script doesn’t necessarily feed the audience. The police team’s chemistry is impeccable onscreen and the villains delightfully awful which only adds to the entertainment value of the film.

Directors Andrew Kam and Johnnie To add the most value to the film through their direction. As an early film for both, The Big Heat is occasionally rough around the edges suffering most in the odd transitions and edits between larger sequences, but there is still an artistry that seeps through in the visuals and increasingly frantic pacing to its narrative that shines through. The action sequences, even when cheesy, are brutal and explosive as they erupt from the growing tension of the plot. There is also a sense of darkness and futility that starts to slip through as the characters become entangled in much bigger issues. There are some truly impressive visuals that pop out to indicate the tones of the film, including a very distinctive gun fight in an ally that’s highlighted by distinct stark color washes of red and blue or the previously mentioned lightning pace of a hospital assassination. There’s a sense of much deeper and artistic elements that these directors bring to the table that lifts The Big Heat well above many of its more mundane and by-the-numbers peers of the genre.

Thus, if you’re a fan of the heroic bloodshed or crime focused action films of the late 80s and early 90s era of Hong Kong, then do yourself a favor and seek out The Big Heat. Sure, it doesn’t quite hit some of the pure heights of entertainment or perfected emotional heart the classics that everyone knows do, but it should certainly be brought up in the conversation as one of the best examples of the genre. It’s oddly artistic at times with its direction, the cast is remarkably effective with what they have to work with, and the action is brutally impressive. It may never make the more mainstream lists for best of the genre, but it’s worth the viewing as a true gem.

Written By Matt Reifschneider
Posted by DarkReif at 10:53 PM