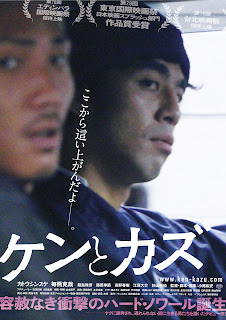 Every once in a great while, a film with real potential to become a great classic comes along, but it fails to be seen by enough people, thus rendering it into the obscurities of a sleeper hit. Ken and Kazu is that film in a nutshell. It's micro budget approach never hinders its big picture vision or execution. This is essentially a Best Picture nominee, without all of the fluff. In an ideal world, Japan would've chosen this film as its submission for the Academy Awards, and it would've been shortlisted, but it's always the gems like this that only get so far, but I digress. Ken and Kazu is a gripping tale of brotherhood, drugs, and redemption. Director Shoji Hiroshi crafts one of the strongest debuts in years, and sets him in a position to become one of contemporary Japan's cinema giants.

The titular characters of this drama work together at an auto repair shop, using it as a basis to stem off of and cover up their slowly flourishing drug trafficking job on the side, or rather front and center in a quick and sudden increasing manner. Ken's girlfriend is pregnant with his child and he needs to raise enough money to ensure his soon to be offspring has the ideal lifestyle that it needs to be provided with. His perfect envisionment of his family to be drives his motivation to peddle these drugs, as much as he really doesn't want to. Juxtapose his loving and giving attitude with that of his partner in crime, Kazu, fueled by hatred and an obligation to take his Alzheimer's stricken mother off of his back and put her into a facility, where according to him, she belongs. Despite their opposite characteristics and life philosophies, the two have an inexplicable bond of brotherhood that draws them together, and their common struggles keep that threatening occupation of theirs okay with them in their minds, to varying degrees. Despite Ken clearly wanting to leave the chaos behind him in wake of a new upbringing with his child and significant other, money keeps bringing him in closer to Kazu, and the two find themselves falling deeper into this dark rabbit hole, incapable of escaping their destructive partnership.

Ken and Kazu absolutely devastated and blew me away. All I knew going in is that it was based on a short film of the same name that Hiroshi had done a few years prior, and that it was shot on a shoestring budget, though the figure is unknown to me, and that it had all the workings of a proper thriller done with much more funding typically. All of these things are true, and more. The film features some of the finest acting I've seen in some time. Shinsuke Kato as Ken kept the film from falling into complete nihilism. It's dark sure, but his humanity and heart shines through, giving this dark ride and sense of hope, and it adds a layer of weight to all of the drama that incurs throughout. Kazu on the other hand, though excellent in portrayal as well by Katsuya Maiguma, is a beast of a different nature. His acting is fierce and he is intense throughout, even when little fragments of his inner most being shine through, he never loses that real tough guy demeanor that he so casually displays. The two leads have the perfect chemistry together that keeps the drama raw and the ride along the way breathtaking.

The technical finesse is on point here as well, with once again, director Hiroshi really knowing what to do at the helm. It's clear he has a true passion, or at least fascination by the subject matter, and a lot of research had went into this before shooting and even writing the screenplay. In a sense, it reminded me of the gritty portrayal of a man heading toward the bottom fringes of society, whose heart and budding love life ultimately factors into his wanting to leave his corrupt ways behind, as similarly seen back in 1983's Ryuji, although the two are quite different in certain regards. Without trying to lean too heavily on comparisons, as this most certainly stands strong on its own to feet, I also couldn't help but be reminded of another similar low budget feature that punched me in the gut some years back, Yang Ik-june's 2009 underrated masterclass in, once again, another human drama on people of that certain side of society, driven to the edge, Breathless.

Comparisons aside, and they are more so reminders of equally great work more than anything, Ken and Kazu confidently delivers one of the finest drug based dramas in a very long time. I'm not quite sure where to rank it in accordance to the year it came out (2015 for world premiere, '16 for Japan general release, or '18 with TWF's forthcoming release), but pick any of the three, and it easily sits in a top 10 of the year list. Frankly it's the best drama I've seen since the aforementioned Breathless, nearly a decade ago now. I cannot stress how excellent of a film this is. It belongs in a plethora of some of Japan's finest modern outings. If you do yourself one cinema favor in 2018, make sure you seek this one out. It's indie enough to appeal to the more arthouse crowd but has the weight and intensity of a well crafted thriller to appeal to a broader, more mainstream audience. The more that see it the merrier frankly. I could go into an infinite loop for the next several years, but I'll shout it only once more, see this film!