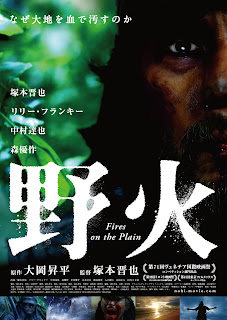 Being completely upfront before we move on with this review: 1) I have not seen the original film, which this film only loosely takes notes from I hear, and 2) I have not read the original novel. That out of the way, I have seen every single Shinya Tsukamoto film to date (save Hiruko the Goblin, which is changing very soon). Going into this film as a huge Tsukamoto admirer, to the point that he is in a three-way tie for my favorite director, I had quite the expectations. Needless to say, I wasn't let down by his newest outing whatsoever, and it was great to see Tsukamoto finally make that film on the horrors of war that he has wanted to for years. Fires on the Plain is a very gory, and harrowing look at men who aren't on the front lines, but rather haunted by their unfamiliar surroundings that quickly consume them and morph these soldiers into very different beings, capable of the unspeakable.

Right from the get go, Tsukamoto throws you in front and center to the horrors that plague he and his fellow comrades. Scattered, and limited in number, Tsukamoto (who is also the lead in the film) finds his own way to a small, stolen shack set up as a medical center, to get treated for a severe cough he has. He is given some rations and finds himself wandering about, trying to help fallen soldiers, returning for more rations and questions pertaining to his sickness, and so on. The shack is destroyed by a passing plane one night, and he hightails it out of there, leaving only corpses behind. Most of Fires on the Plain features a wandering Tsukamoto, as he encounters various soldiers and local villagers, who naturally are quite hostile, given the dire circumstance. It's exactly as I imagined war was back then, and perhaps so now. I won't get into personal politics and beliefs here, but the hell of war, as many say, seems to be vivid and unapologetic in its depiction here. It never showcases gore for gore's sake, though some may argue that, and it never holds back, and in fact it shows far more than I even thought Tsukamoto would ever display. He is known for his extreme cinema, but knowing a lot about the director himself, and his thoughts on certain topics, war is something that has loomed over his head for years, and this really showcases the nightmares of that reality that we are all just a moment's notice away from being slung into. It is truly frightening that people can do these things to one another, no matter how much time passes and progression as a species occurs. At the end of the day, our own stubborn beliefs turns us against one another, no question about it.

There isn't much of a plot to Fires, but like some films of this nature, it isn't deemed necessary. It is a journey, and a road movie if you will. You are seeing this through the eyes of this man, and in a way, you feel as much of an observer as he does. There are some genuinely shocking moments in this that are sure to stick with you for years to come. A scene where he is resting inside of an abandon church, and a young, local couple playfully enter, left me in chills, and is perhaps my favorite scene in the film, but that could also go to a few other moments, though I most certainly do not wish to spoil anything. As this soldiers trudges on through this hellish descent, spiraling deeper into madness, the heinous imagery becomes more and more abhorrent to look upon, but again, it never holds back. I think a certain type of person will find this film to be cool, for all its practical gore effects, and I hate to say that, but they will be out there. I myself, just got so absorbed that I left the film shook. Tsukamoto hasn't really gotten under my skin like this, aside from Kotoko, since perhaps A Snake of June. This easily belongs in the top echelon of the director's greatest works.

I can't honestly really find anything to point out as flaws that I'd hold against the overall piece. I don't think it is a perfect film, but oddly can't put my finger on what holds back to that high level of awe. One thing, which is more of a nitpick than anything, is that Yusaku Mori as Nagamatsu really got on my nerves at times, with his constant crying, but who knows how one would act in a time as such. Everything really fires on all cylinders. I wasn't particularly a fan of the editing in the beginning, though it does suit the nauseating paranoia that our lead hero is experiencing. It's not bad editing per say, but I would have like to not felt so slung around right off the bat. After another visit, whenever I can stomach it, that thought may change entirely. The cinematography is great here and the score by long time collaborator Chu Ishikawa is just as effective as ever, and once again, really burrows itself deeply into your conscious. Almost every thing about this one is top notch to me. I don't tend to focus on specific scenes, and will dodge details here, but the final scenes really spoke to me and capped the film off in a perfect way. No spoilers, but the ending moments I have thought about more than almost the entirety of the rest of the film.

It goes without saying that Tsukamoto is easily one of the finest masters of modern cinema. Everything he puts out is challenging and very much in your face, but forces you to try and distance yourself, and to think. I have always gotten something out of everything he has worked on, and that is no different here. It may be a little obvious in its messages, but the depiction of war showcased here I think will honestly polarize certain people. As I said, some will be drawn in and blown away, and others will chalk it up as nothing more than shock value, which is a shame, as I think Fires is quite powerful, and is one to see without even the slightest doubt. Tsukamoto wasn't lying when he said that the horrors of war were more frightening than anything man could imagine, and I believe even his grizzly depiction doesn't even begin to scratch the surface of the actual darkness that this horrible tradition of humanity has to offer. I strongly recommend this to Tsukamoto and war cinema fans alike. It will stick with you.