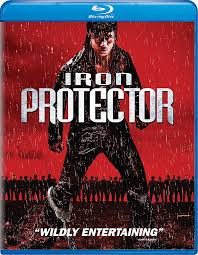 It took a while and a couple of full watches, but Iron Protector finally clicks for me. The reason it takes a little bit is that, due to the hype machine when it was initially released in China and the various trailers released for the film that had me hooked, expectations for the film are in line with it being an old school Hong Kong action flick with stunts galore and an overly serious approach to its plotting and narrative. This is not entirely the case with Iron Protector. For all of the hoopla made over Yue Song being ‘the next Bruce Lee,’ Iron Protector makes a better case for Yue Song at being the next Stephen Chow – just with more stunts and action. As it turns out, this film is a full-blown action comedy at times and our star, who also serves as the director, is admirably good at pulling off the slapstick and often overzealous comedic routines with the seriousness of an 80s Hong Kong action star. The result is much better (and much different) than expected.

Like many other films that harken back to an old school genre or style with comedic elements, Iron Protector works better than being a spoof because it acts more like a love letter to classic martial arts and action movies of the past. Stephen Chow could make it work with his films like Kung Fu Hustle or his shockingly fun God of Gamblers flicks, but here Yue Song makes it work rather well with Iron Protector. Song eats screen in the lead role, as do most of his gimmicky secondary cast around him, and he balances the overly serious cheese of the film with the legitimate old school story to keep the tone. There are moments where the film feels like a beat-em-up video game or perhaps an outrageous graphic novel, but that only adds to the fun that the film is bringing to the table. Occasionally Iron Protector can still be a bit too serious with how it presents its material, i.e. the flashbacks feel forced and some of the sub-plotting with his ‘brother,’ but if the viewer goes in expecting the strong sense of love for the cheese of the genre that Song is using, then the mixture of over the top stunts, humor, and characterizations all do build a solidly fun film.

Of course, as with all of these films, it’s the action that is meant to highlight the film and I’ll be damned if Song doesn’t pull it off. The almost superhuman abilities of our hero, partnered with the comedic sense of using sped up frame rates or slow motion, make each of the action events spectacular to watch. Mr. Hero outruns a van, knocks people 30 feet through the air, and battles off dozens of faceless henchmen with ease. By the time he has to face the gimmicky villains in the second half, the audience knows they are in for some classic over the top action worthy of the time and money invested in watching the film. The stunts are pure fun and impressively executed, but the editing is a tad too modern for its own good at times. This was a problem with Song’s first film, The King of the Streets, and it’s a problem here as the edits take away some of the impact of the fight work and the comedy present in those moments. Still, with the right expectations, action fans will not be disappointed with the material present in the film.

Iron Protector, for all of its silliness and flawed narrative flow, is still a riot to watch. The action is punchy, the nods to the cheesiness and style of 80s Hong Kong action and comedy are well executed, and the film has an energy and spirit that carries it through the rough patches. Iron Protector is a fun and spirited cinematic time that works as a love letter to past. Go in with the right expectations and you’re certain to come out with a huge smile on your face.