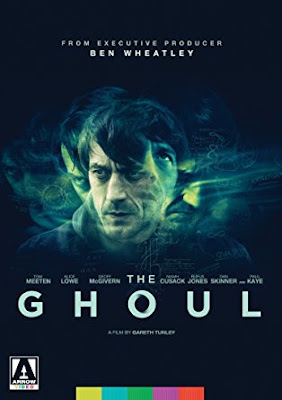 When Arrow Video announced their release for The Ghoul, it was a little difficult to know what to expect. The collector focused company rarely releases newer films and when they do they usually pick unique if not provocative films to release under this arm of the company, so there is still something to be said about that. Partner that with an executive producer credit for Ben Wheatley and there is certainly some momentum the film has going for it. Yet, the lack of word of mouth in cult cinema circles seemed a bit concerning. The Ghoul, while certainly featuring some very strong elements that are popular in horror/thrillers, is a mixed effort. For all of its dramatic heft and intriguing ideas present in the film, it’s one that wavers with its slow burn narrative and struggles to make the connection with its vague portions. It’s a film that will definitely have its fans, but in a year where atmospheric horror thrillers are all the rage (and very impressive in quality) The Ghoul will not make the impact outside of its cult fan base.

The concept behind The Ghoul, about an awkward ex-detective who is asked by a friend to help with an investigation concerning a very questionable double murder, is rather fascinating. In fact, there are a ton of elements to its narrative, plot, and characters that is impressive through and through. The manner that this film unveils its mysteries and twists builds in some fantastic psychological elements that increases the paranoia and blurred reality pieces by the second half of the film. It’s meant to be a film that makes the audience question the details they are being fed to them and it’s the rather subdued performances that ultimately carry the film. Tom Meeten strongly holds the film together with his awkward dialogue and lived in performance while the secondary cast uphold their own to help him through some of the slower moments in the film and subtle writing. The most impactful aspect of The Ghoul is how these various characters interact in an indie film dramatic manner more than the twists or psychological horror elements of the film and those willing to dig into the performances and details will find a film to enjoy.

The problem that remains, which does affect how the film works as a whole, is that The Ghoul really lacks a sense of urgency and energy behind its execution to carry it through its subtle writing and slow burn narrative. After a hook focused introduction that injects a slick supernatural slant, the film almost immediately slows down to a glacial pace. Even as it builds the tension, through characterization and mysterious intrigue in the plot, the film never seems to find the right blend of momentum for its pushes and pulls. By the time the big and slightly existential elements of the third act start to appear, the audience has had to dredge through a second act that pretty effectively kills the film’s movement. The performances and key moments keep the audience interested enough, but it crumbles as it goes until its finale where it redeems itself somewhat with some wild leaps, theories, and vague connections.

In the end, The Ghoul is simply a mixed effort. Strong atmosphere, a clever hook, and its impressive performances carry the film even when it lags in its pacing and never finds an urgency to sell the interesting elements through the vague narrative builds. It’s easy to see why Wheatley would be an executive producer on the film, but The Ghoul lacks his ability to truly balance it all. As a bonus, the special features on this Arrow Video release add a lot of great analysis and behind the scenes material to flesh out the film (improving the quality of the film immensely really) once its finished, but judging the film on its own, it just doesn’t nearly hit the heights of similar films of similar genres for the year. The Ghoul will find its audience with a bit of time and some will truly love it with the cult focus these kinds of films deserve, but for this reviewer it’s underwhelming as a whole.

Written By Matt Reifschneider
Posted by DarkReif at 3:20 PM