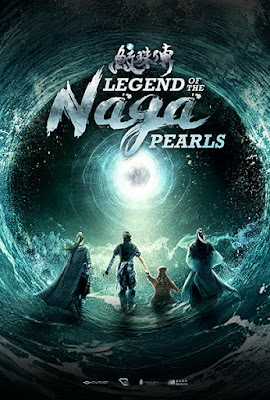 From the outside, it seems that Chinese film audiences love big, special effects packed spectacle films. Even when a film is more personal and less fantasy driven, like the record breaking Wolf Warrior II, it follows the pattern that audiences love to be entertained by the outrageous more than anything. Which is why Legend of the Naga Pearls seems so fitting. Even for those more in tune with the robust style of Hollywood, this film can seem a bit overwhelming as it takes the popular fantasy adventure film and slathers it with stylish elements of the popular tomb raiding design and classic wuxia aspects. As a film, obviously meant to be more of a family friendly affair, Legend of the Naga Pearls is not groundbreaking and it follows a lot of tropes that make it predictable and easy to consume as a narrative. Yet, it also carries with it a rambunctious energy and spirit that makes the more ridiculous nature of its style and the bland plotting something much better than it should be. Legend of the Naga Pearls is big, spectacular fantasy action with enough charm to quench the blockbuster popcorn tone that it’s aiming for even if the foundation its built on is thin.

Legend of the Naga Pearls starts off on a gravelly path that features an animated intro of context about winged people and regular people going to war in the past with a bunch of other fantasy mumbo-jumbo thrown in for good measure. There’s ten minutes or so of quick witted banter and awkward flashbacks that serve as exposition, but it’s only after that is all done that the film starts to get its groove in. It sets up context, introducing us to our various heroes that will be facing their own demons in light of a world shattering event, and it kick starts the adventurous plot. It’s quite bland in this regard and wholly predictable in who, what, and why things are happening for those even mildly familiar with adventure films. The characters are mostly broad stroke representations of real emotions and their bickering and chemistry save much of the hum-drum writing from being too mediocre. This is the family fun fantasy adventure film at its core, right down to the silly secondary characters, expected romantic subplot, and larger than life baddies.

In a way though, Legend of the Naga Pearls can be forgiven of these foundational elements because it certainly feels as though they wanted to make it a family friendly adventure flick. The use of slapstick comedy, the CGI animated pet side kick, and some various fart jokes and broad obvious plot progressions all indicate that this is the intent. Some of the tonal changes can be a bit odd if Legend of the Naga Pearls truly is meant to be family friendly as there is some shockingly gory violence on hand and a few sexual jokes that can be seen as pushing the envelope a tad too far, but it’s an intriguing balance nonetheless and one that gives the film some leeway from an audience critiquing it too harshly.

Yet, the boundless energy that is present in the film also helps its audience glaze over the pitfalls of its scripting and characters. A good portion of this is due to its cast, in particular the three protagonists that are driving the action of the film, who share some impressive chemistry and balance the more dramatic material with the slapstick humor. The entire cast is game for the genre shifting that’s present in the film and whether it’s the romantic subplot or the wuxia style sword fighting sequences (which are surprisingly fun and effective might I add) they leap into whatever is called of them and that enthusiasm shows up in the onscreen charisma. This is shared through a lot of the visual fun that director Yang Lei brings to the table and the fun and often silly set/costume/special effect designs.

Legend of the Naga Pearls is ultimately a mixed bag thanks to a predictable script and uneven tone due to its family friendly approach to the adventure. When the film hits its momentum though, it’s a rambunctious adventure film with action and comedy to spare. It has a wonderfully fun cast with fantastic chemistry and some surprisingly solid wuxia style action set pieces. It’s a film that is hardly for casual cinema goers and requires a bit of understanding of the popular genres that it is mixing together, but for those willing to buckle in for a fantasy adventure ride then this can easily suffice.